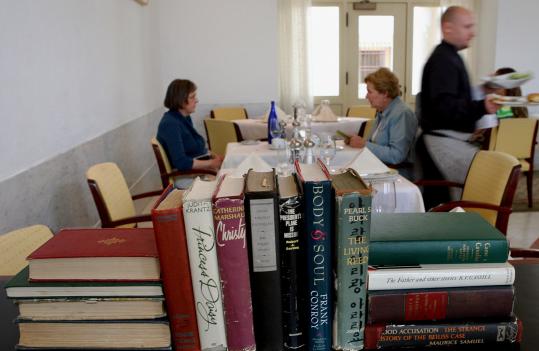 WENDY MAEDA/GLOBE STAFFThe Boston Public Library's café and restaurant are reopening with a new look and fare, such as prosciutto-wrapped monkfish (below). (Wendy Maeda/Globe Staff)
By Jenn Abelson Globe Staff / May 8, 2009
Text size – +

The Boston Public Library's restaurant and café at Copley Square are getting a makeover and coming-out party under new operator Holly Safford of the Catered Affair.

This week, Safford unveiled a new look and menu for the Courtyard Restaurant, formerly known as Novel. The space includes colorful, modern Maud Morgan prints from the library's collection, a large orchid arrangement, and new fare with a focus on local organic foods.

Safford, who runs a gourmet catering company with offices in Hingham and Boston, is hoping to shake up the staid Back Bay eating spaces and provide a meeting spot for book clubs, wine dinners, story hours, and mom's events. The new owner of the 50-seat restaurant, which is open during lunch hours, is looking to get a liquor license to expand to dinnertime. Safford is also interested in setting up an eating area in the courtyard.

"I want to make this a destination restaurant for visitors from around the world," said Safford, 60, who won the five-year contract from the city in March. "I want to reinvent the space entirely. And it's great this institution chose to use a local company."

The restaurant's former menu included heavy foods and did not change for six years under the previous operator, Safford said.

She plans to switch the menu four times a year, and largely feature organic products from farms in New England.

"For an entire year, the average daily sales were under $250," Safford said. "It was not well marketed, not well known, and certainly didn't have a lot of patronage."

Some of the meals debuting this week include a pistachio-crusted chicken breast with a three-bean succotash and cheddar grits for $16; handmade tortelli of spring peas and mascarpone with snap peas and truffle foam for $15; and prosciutto-wrapped monkfish for $16.

The Courtyard Restaurant is keeping one of the library's oldest traditions: afternoon tea for $20, which includes fruit, scones, tartlets, finger sandwiches, and at least half a dozen teas.

The library's Map Room Café, a more casual venue, will also be operated by Catered Affair.