The contraction continues but has slowed, Fed says 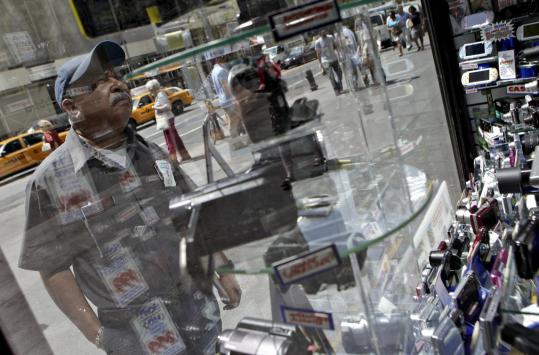 WASHINGTON - Consumers snapped back to life at the start of the year, renewing hopes the recession is losing steam.

Even though the economy shrank again in the first three months - and by a lot - Americans stepped up purchases of cars, furniture, and appliances. The surge in consumer spending, which accounts for about 70 percent of the economy, could set the stage for a rebound this year.

Many consumers have been fortified by fatter paychecks from tax cuts and smaller mortgage bills from refinancings. If they keep spending, their dollars could deliver a powerful punch: Businesses will need to replenish their shrunken inventories, leading factories to boost production and nourishing the economy.

Against that backdrop, many analysts think the economy is sinking less this quarter than it did from January through March. Most believe the economy could start growing again by summer, or more likely, by the final quarter of this year.

Federal Reserve chairman Ben Bernanke and his colleagues, in opting against further action to shore up the economy at this point, detected glimmers that the recession might be easing.

"The economy has continued to contract, though the pace of contraction appears to be somewhat slower," Fed policy makers said in a statement yesterday, hours after the government released its report on the economy's first-quarter performance.

Those negative forces - or the emergence of new ones - could cause consumers to ratchet back spending, throwing the economy into another tailspin.

The economy logged a worse-than-expected 6.1 percent annualized drop in the first three months of this year, despite the rebound by consumers, the Commerce Department reported.

The decline was nearly as sharp as in the final three months of last year.

Still, consumers roared back in the first quarter of this year. They boosted their spending at an annualized rate of 2.2 percent, the most in two years. Gains in disposable income helped by tax refunds and government benefit checks like Social Security helped spur the spending gains, analysts said.