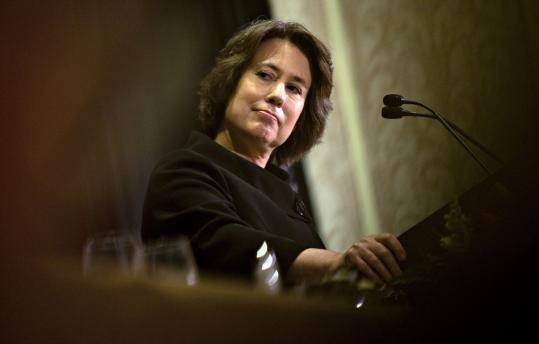 The FDIC should be able to take over and shut bank holding companies, insurers, and other large institutions instead of just failed commercial banks, Bair said in a speech at the Economic Club of New York.

That would shield taxpayers from absorbing losses when government protects companies that are deemed "too big to fail," a concept that should be "tossed into the dustbin," she said.

"The FDIC is up to the task, and whether alone or in conjunction with other agencies, the FDIC is central to the solution," Bair said. "Given our many years of experience resolving banks and closing them, we're well suited to run a new resolution program."

The speech represented the first time Bair has said she wants the new power, countering arguments that the Federal Reserve is best equipped to manage such authority as Congress prepares to address the issue this year. Bair has previously said that some regulator should have resolution authority and suggested her agency could do the job.

Federal regulators have created programs in the past year to prop up financial companies hit by the financial crisis - handing out more than $90 billion to Citigroup Inc. and Bank of America Corp., providing more than $180 billion in loans to American International Group Inc., and establishing debt-guarantee programs.

The FDIC wound down 29 failed banks and thrifts this year.

The absence of appropriate authority "has contributed to unprecedented government intervention into private companies," Bair said. "Taxpayers should not be called on to foot the bill to support non-viable institutions because there is no orderly process for resolving them."

Bair recommended exercising new authority under a "good bank-bad bank" model, in which the government would take over troubled companies and force stockholders and unsecured creditors to pay the costs.

Viable portions of the company would be put into the good bank, while the ailing portions would remain at the bad bank to be sold or closed over time, Bair said.

The costs imposed on the stockholders and unsecured creditors and fees collected from other "systemically risky" firms would pay for the bad bank, Bair said. "This has the benefit of quickly recognizing the losses in the firm and beginning the process of cleaning up the mess," she said.

Bair's request also conflicts with remarks made last week by fellow regulator John Dugan, who heads the Treasury's Office of the Comptroller of the Currency, which supervises national banks. The Federal Reserve "is the logical choice" for the new authority, Dugan said in a speech last week.

The American Bankers Association has also challenged the idea of giving new authority to the FDIC, saying the agency's mission would be jeopardized, while banks may bear unnecessary costs.