New to the market

Low mortgage rates, falling prices, and a tax credit are luring first-time buyers into homes they can afford 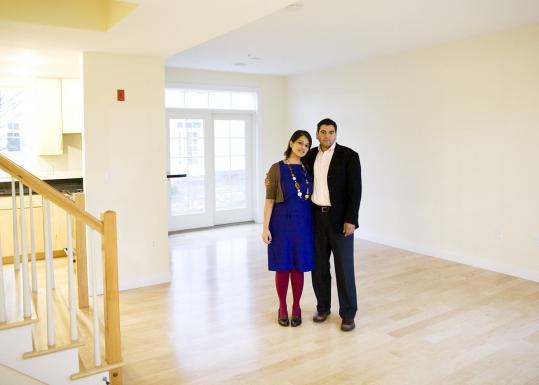 Urrooj Rehman and Syed Hasan wanted ''to snap something up'' and chose this condominium in Mattapan. (Yoon S. Byun/Globe Staff)
By Jenifer B. McKim Globe Staff / April 9, 2009
Text size – +

A growing number of first-time buyers are jumping into the housing market this spring because of falling prices, historically low mortgage rates, and an $8,000 federal tax credit.

"Houses that were not previously within the grasp of first-time home buyers" are now attractive to them, said Thomas Gleason, executive director of the Massachusetts Housing Finance Agency, the state's affordable housing bank. "There is a lot of pent-up demand."

While real estate brokers said it is too early to know whether the market is rebounding, there are indications that qualified buyers are finally deciding to get off the sidelines. During the third week of March, MassHousing booked a record $25 million in loans, topping its previous high of $17 million during the week of Jan. 11., when mortgage rates dropped significantly, according to Gleason.

New homeowners Urrooj Rehman, 27, and her fiance, Syed Hasan, 35, had an added incentive to buy a three-bedroom condominium at the Olmsted Green complex in Mattapan - they are getting married this weekend. It helped that the price of the condo recently dropped by $50,000 to $320,000, Rehman said. In addition, they were able to lock in a 30-year mortgage rate at under 5 percent and next year will be able to claim the $8,000 tax credit for first-time buyers included in the federal stimulus package.

"I wanted to snap something up," said Rehman, a psychiatry resident at Brigham and Women's Hospital in Boston. "It might get lower, but I still feel good about my decision."

Nationally, first-time buyers accounted for about 65 percent of transactions of existing homes for the first quarter of the year - a 41 percent increase from the same period last year, according to HouseHunt Inc., a information firm based in Huntington Beach, Calif. The National Association of Realtors also reports more first-time home buyers.

"The market heals from the bottom up," said Walter Molony, a spokesman for the realtors trade group.

In the Boston area last week, 464 sales agreements were signed, a 53 percent increase from the first week in March, according to MLS Property Information Network Inc. The region's real estate market traditionally accelerates in the spring, but many wondered whether that would be the case this year, given the slowing economy and housing collapse. While MLS does not track how many of the agreements involved people buying their first homes, national data show newcomers probably generated much of the activity.

John Jamerson Jr., 26, and his wife, Stacey, 24, found that low prices and loan rates combined with tax incentives made the prospect of owning their first home irresistible. The couple, expecting twins in the fall, plan to sign a purchase and sale agreement this week for a $199,000 townhouse at The Village at Merrimac Landing in Tyngsborough.

"The $8,000 credit is definitely huge," said Jamerson, who sells plumbing supplies. "We are looking to buy cheap and in four to five years make a nice profit."

The Jamersons are among six new buyers at the development - five of whom qualify for the tax credit as first-time buyers, said project developer Dennis Page.

Page said the company decided to downsize units in a second phase of the housing development so it could attract first-time buyers. The units, being sold for between $199,000 and $209,000, went on the market several weeks ago.

"We are seeing a whole lot of activity for first-time home buyers," said Page, co-owner of the Page and Trahan Cos.

And bargain-seekers are finding more properties to choose from this spring. Over the last six months, the median price for a single-family home in Massachusetts has been below $300,000. Before that, the median price had not dropped below $300,000 since early 2003, according to Warren Group, a Boston company that tracks real estate transactions. The median condominium price fell 14 percent in February to $220,000, from $255,750 in February 2008 - the lowest it's been since February 2003.

Karl Case, cofounder of the S&P/Case-Shiller home price indexes, said properties priced under $261,000 are the best bargains because they have dropped the most - 27 percent - since the peak of the housing market in September 2005. Mid-priced homes, valued between $261,000 and $388,000, dropped 20 percent during that period. In contrast, homes above that level have fallen in price only about 13 percent since 2005.

"The lower end is where the action is," said Case, a professor of economics at Wellesley College. "They are not finding bargains in Newton, Brookline, and Sudbury."

John Ranco, of Gibson Sotheby's International Realty in Boston, said the extraordinary incentives to buy provide reason for optimism. Inventory is up and sales agreements have spiked over the last two weeks, he said, especially on properties priced below $500,000.

"There is offer activity all over the place," Ranco said.

Ricardo H. Rodriguez, an agent with Coldwell Banker Real Estate in Boston's Back Bay, said more than 60 people attended an open house last weekend at a $415,000 one-bedroom condo in the South End. By the end of the day, there were three offers on the property, he said.

"The past two months have shown an increase in activity," said Rodriguez. "The prices in Boston have kind of leveled, and what you are seeing right now is good fair market value."

Despite the incentives, not all qualified buyers are convinced it's time to commit to a mortgage. Some have questions about job security, the economy, and whether prices will fall even more.

"They seem to still be in the mode of 'let's see what is there,' " said Bill Kuhlman, owner of Kuhlman Residential Real Estate Services in Needham, and past president of the Massachusetts Association of Buyer Agents. "In a lot of communities, they are still not finding the houses they are looking for at the prices they like."