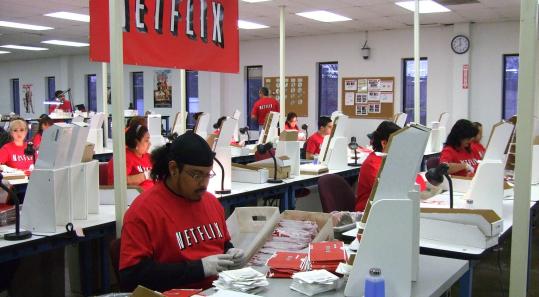 Netflix currently charges $1 a month on top of its membership fee for access to Blu-ray movies, according to its website. (Marine Laouchez/ AFP/ Getty Images)
Bloomberg News / March 31, 2009
Text size – +

NEW YORK - Netflix Inc., the largest US mail-order movie service, plans to raise rental fees for Blu-ray discs about 20 percent at the end of April as members increasingly choose the high-definition format over conventional DVDs.

The price increase applies only to Blu-ray rentals and will begin on or after April 27, the Los Gatos, Calif.-based company said. Netflix currently charges $1 a month on top of its membership fee for access to Blu-ray movies, according to its website.

Almost 10 percent of Netflix customers are choosing Blu-ray over standard-definition rentals, the company said. Netflix offers more than 1,300 titles in the high-definition format, up 60 percent in six months, it said. The company plans to double the number of subscribers using Blu-ray this year, chief executive Reed Hastings said yesterday.

"We're evangelizing the format," Hastings said. "If Blu-ray gets to 100 percent of US homes like DVD did, then consumers will be watching disc-based entertainment for at least another 20 years."

Greater consumer adoption would benefit Netflix because it has fewer competitors in disc rentals than in online streaming, where it battles Amazon.com, Apple, Blockbuster, and others, Hastings said, adding that streaming is a longer-term focus for the company.

The Blu-ray fee is also rising because high-definition discs can cost as much as 30 percent more than standard DVDs, Netflix said. At Amazon.com, the largest Internet retailer, Warner Bros.' "Dark Knight" sells for $23.99 on Blu-ray, 37 percent more than the $17.49 asking price for the conventional format.

Under the new pricing model, access to Blu-ray discs at Netflix will vary by plan, starting at an additional $1 for the lowest-priced membership and adding as much as $9 to the highest-priced, the company said. For the $13.99-a-month plan, allowing members to have two DVDs at a time and an unlimited number per month, customers will pay an extra $3 for Blu-ray.