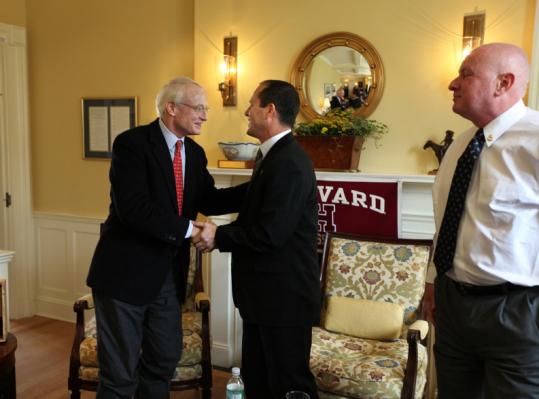 Jerusalem traces its history back to the fourth millennium BC. But looking to the future, its new mayor is turning to Harvard Business School for advice on American-style economic development.

"We have a 3,000-year-old brand," Barkat, 49, told reporters at a briefing in the business school's Ludcke House. He was flanked by Porter and business strategist Yagil Weinberg, who advises countries in the Middle East on national and regional competitiveness.

Barkat said Jerusalem, the poorest city in Israel, is following Porter's playbook by building its economy on three existing areas of strength: culture and tourism, healthcare and life sciences, and outsourced medical and financial services. "The whole concept is focusing on areas where we have competitive advantage," Barkat said.

Porter has worked on economic development in cities ranging from Boston and Columbus, Ohio, to Seoul, South Korea, and Kigali, Rwanda. He said it was hard for him to resist helping Jerusalem, a religious center for Jews, Christians, and Muslims.

Barkat was introduced to Porter by Peretz and New York investor Bill Ackman, a former student of Porter, during a 2004 visit to Boston. Working with Weinberg, who's collaborated with Porter for more than a decade, they formed Startup Jerusalem, a nongovernmental organization that lined up secular and Orthodox Jews as well as Arabs to support the cluster-based economic development plan. Many of those involved are now moving into Barkat's mayoral administration.

Jerusalem today gets only about 2 million visitors annually, far below the 40 million to 50 million of some other large cities around the world, Barkat said. He said there is room for substantial growth in "medical tourism," from patients being treated in Jerusalem hospitals, and religious tourism. "We have a one-stop shop for people who want to sample the Jewish, Christian, and Muslim experience," he said.

Barkat said concerns about security, which may be dampening enthusiasm for travel to Jerusalem, are largely unfounded.

"The facts on the ground are if you take terrorism and crime together, we're one of the safest cities in the world," he insisted.

Many in Israel, along with the Obama administration in the United States, back a two-state solution to the Middle East conflict, creating a Palestinian state that also would have Jerusalem as its capital. Barkat, considered an ally of incoming Israeli prime minister Benjamin Netanyahu, said he tries to separate politics and economic development while favoring a united Jerusalem.

"I have no doubt in my mind that our model would work much better in a united city," Barkat said. "Both ideologically and practically, you will not see a split city that really works."