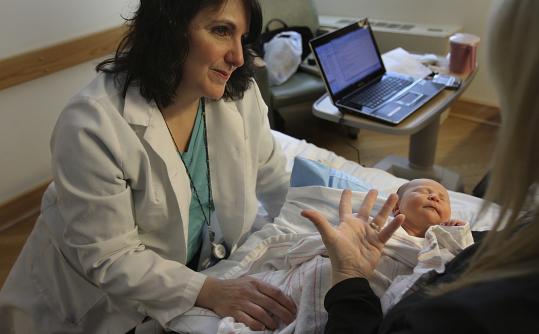 Donna Norris has seen it all as a lactation consultant, from a lesbian couple who both wanted to nurse their baby to a dad who, after sipping a sample of breast milk from a spoon, said it "tasted so sweet."

In her 20-plus years as an expert in breast-feeding, Norris has helped thousands of parents by providing nursing support, advice, and education.

"Breast-feeding is a natural act, but it doesn't come naturally to a lot of women," says Norris, who is one of three lactation consultants at Newton-Wellesley Hospital and also has her own practice. "Just like learning to play tennis or the piano, nursing a baby is a learned behavior that needs to be practiced."

For years, women turned to their family and neighbors when they had questions like, "My baby won't latch on properly - what should I do?" or "Why isn't she gaining weight?"

But now, says Norris, "women don't have this support network, and, unlike in the past, haven't grown up watching babies being positioned, latching, swallowing at the breast, so they don't have any idea what to do."

Enter the lactation consultant, typically a registered nurse or midwife who has passed a rigorous certification process and is not only trained in anatomy, physiology, counseling, and infant growth and development, but also knows the intricacies of milk synthesis and composition.

"Human milk is specifically designed to grow infants and toddlers, whereas cow milk is meant to grow a baby cow," says Norris, who adds one of the benefits of breast-feeding is that the components of the milk change over time to meet the needs of the child. Breast milk also contains valuable antibodies that may help the baby resist infection. Moms benefit as well, since breast-feeding has been shown to protect women against osteoporosis, hypertension, ovarian cancer, and even obesity.

Norris was a young, inexperienced pregnant 18-year-old when she picked up the classic book "Nursing Your Baby" by Karen Pryor. It was the late 1970s, and bottle-feeding was all the rage.

"But the book tripped something in me, and I knew this was something I wanted to do," says Norris, who went on to breast-feed her five kids. She decided to become a lactation consultant when, as an obstetrics nurse, she saw many nursing mothers in tears, making worried phone calls for help.

"So many women desperately want to nurse, but many of them encounter difficulties," says Norris.

Norris says a lactation consultant can earn between $50,000 and $100,000, and have employment opportunities in hospitals, public clinics, physician practices, visiting nurse associations, and even employee assistance programs.

Have you ever helped a mom nurse triplets - or more babies?
Twins are very common, obviously, but I have had triplets a few times. I'll never forget the first time when I walked into a room and saw three cribs. I just blurted out, "What in the world are you going to do?" The dad looked at me and said, "Well, I have a week off work." I just laughed. The mom nursed one baby on one side, the other baby on the other side, and the third baby on both sides.

What are the most common breast-feeding issues?
Flat or inverted nipples; a baby who won't latch on; incorrect positioning; a sleepy or reluctant nurser; and sore, cracked nipples. I assess the situation, and come up with a plan, such as suggesting different ways to position the baby, providing a breast pump, and even simple things like being able to identify whether a baby is swallowing or not, since some women can't even identify this sound.

What's the most unusual situation that you've run into over the years?
I had a 29-year-old mom who had a hysterectomy because of uterine cancer. Her sister was artificially inseminated with her husband's sperm and acted as a surrogate birth mother. This mom was determined to nurse, although she was never pregnant, and believe it or not, it is possible for women like her - such as moms who are adopting - to actually create a milk supply. They take the birth control pill, abruptly stop it, then take a hormone, and pump. When the baby is born, these moms use a supplemental nursing system to let the baby suckle until they can produce milk themselves. This mom did this, and her sister pumped and shipped her milk on dry ice to her as well, so she had a back-up supply. At the end of six weeks, the mom was able to nurse the baby. It is quite a story.

You're also trained in cultural diversity, since you deal with different populations. What are some differences that you run into with the hospital's increasingly international clientele?
Some Asian cultures view the colostrum, or first discharge of milk, as being bad for babies, so they'll give them formula until the later milk comes in. We try to respect their culture but still educate them and teach them that the colostrum is like liquid gold, the perfect starter food for babies. And we had an Indian family here, very technologically advanced. The father was on Skype, talking with the grandmother in India, who was giving directions on how to nurse via the computer. We find other cultures don't have the hang-ups that we have about women and breast-feeding. Here in the United States, we view women and their bodies as sexual organs, but other countries see the breast as a feeding vessel.

It must feel good to help so many families.
Yes, it does. One mother was from Qatar, in the Middle East, and delivered at 34 weeks, so her baby was premature. The baby was in the nursery for a month, they were staying in a hotel room, and she was here without her family. I spent time with her, and taught her how to nurse her baby. Before she left the hospital, she took both my hands and said, "In my country, it's the mother who teaches the daughter how to breast-feed. You are my mother to me." It was quite gratifying.