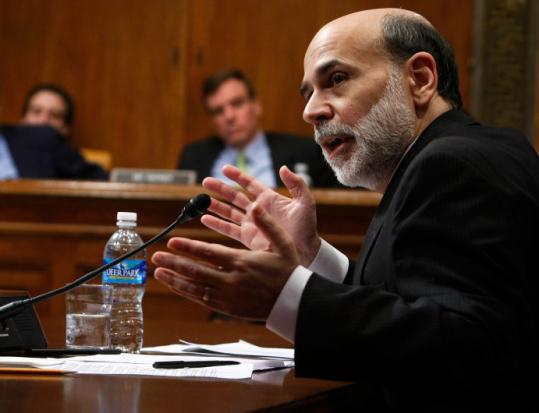 WASHINGTON - Federal Reserve chairman Ben S. Bernanke said American International Group operated like a hedge fund and having to rescue the insurer made him "more angry" than any other episode during the financial crisis.

"If there is a single episode in this entire 18 months that has made me more angry, I can't think of one other than AIG," Bernanke told lawmakers yesterday. "AIG exploited a huge gap in the regulatory system, there was no oversight of the financial-products division, this was a hedge fund basically that was attached to a large and stable insurance company."

Bernanke's comments foreshadow tougher oversight of systemically important financial firms, and come as President Obama seeks legislative proposals within weeks for a regulatory overhaul. The US government has had to deepen its commitment to prevent AIG's collapse three times since September as the company accumulated the worst losses of any US company.

The company "made huge numbers of irresponsible bets, took huge losses," Bernanke said. At the same time, officials "had no choice but to try and stabilize the system" by aiding the firm.

AIG is getting as much as $30 billion in new government capital and relaxed terms on its bailout announced Monday.

In another sign of tighter regulation to come, Bernanke said supervisors should have authority to bar new financial products that may be destabilizing to markets.

Bernanke made the AIG comments in response to a question from Senator Ron Wyden, an Oregon Democrat, at a Senate Budget Committee hearing yesterday in Washington.

"AIG is a huge, complex, global insurance company attached to a very complicated investment bank, hedge fund that was allowed to build up without any adult supervision," Treasury Secretary Timothy Geithner said yesterday during testimony to the House Ways and Means Committee.

Because of "the risks AIG poses to the economy," he said, "the most effective thing to do is to make sure the firm can be restructured over time."

The Obama administration last week unveiled a budget blueprint that included standby authority for as much as $750 billion in new aid to the financial industry.