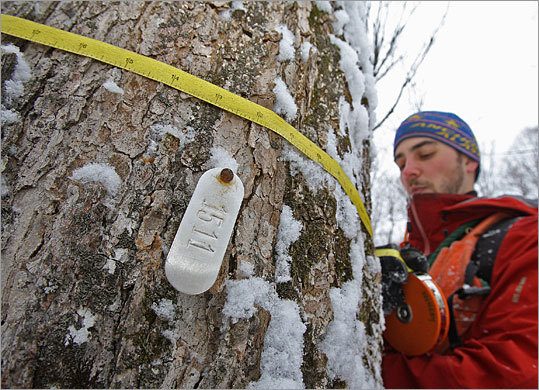 Nature gets makeover in forest lab

On this recent snowy day, his forest lab looked utterly natural - a few wind-strewn trees lying under a canopy of beech, birch, and maple. But looks were deceiving; Keeton and others had logged and carefully shaped the wooded slope, using chainsaws and other machinery to emulate what happens in woodlands over centuries.

Using Mother Nature as a blueprint, Keeton, a University of Vermont forestry specialist, has developed a technique that allows for logging while maximizing the carbon kept in the forest and out of the atmosphere, where it can trap the sun's heat and drive global warming.

The work by Keeton and others offers landowners a way both to profit from selling timber - though less than under conventional forestry practices - and contribute to the fight against global warming, at a time when keeping carbon dioxide and other greenhouse gases out of the atmosphere is becoming a political, environmental, and economic priority.

"When the climate problem became more public and people began to worry about the amount of carbon we're putting into the air, their eyes began to turn to our forests," said Bob Perschel, northeast region director of the Forest Guild, an association of professional foresters. The best way to keep carbon in a forest is to leave it alone, but given the reality of logging, "the question is, what can we do in our forests to sequester more carbon?"

Interest in trees' carbon-storage abilities comes on multiple fronts. In a bill now being refined, US Representative Edward Markey, the Malden Democrat leading House efforts to reduce greenhouse gas emissions, has proposed setting aside a portion of income from auctioning off carbon credits - licenses to cover the amount of carbon dioxide polluters release - to support practices that increase the carbon stored in forests, crops, and soil.

The Forest-Climate Working group, a national coalition of conservation groups, foresters, the lumber industry, and others, last month said that stepping up forests' ability to remove carbon from the atmosphere should be a central part of federal climate change policy.

Locally, a working group is drafting recommendations for giving landowners a financial incentive to manage forests so that they store carbon better than an average managed forest. Woodlands owners could be granted carbon credits through the Regional Greenhouse Gas Initiative, an agreement among 10 Eastern states to limit carbon emissions. The credits could be sold to power plants to offset their pollution. The regional pact, which includes Massachusetts, is expected to be a model for President Obama's proposed national "cap and trade" system for reducing greenhouse gas emissions.

"It's important to get it right now. We're trying to vet these ideas in our region," said John Hagan, president of the Manomet Center for Conservation Sciences, who helped draft the recommendations.

Whether policy makers adopt these ideas will be important for the environment and for the forest and paper industry in New England, which employs 60,000 people and ships $12 billion in products each year, according to the American Forest & Paper Association.

Young forests take in carbon at a higher rate because they grow fast, but old-growth forests - rare, pristine woodlands that have remained untouched and unlogged - are like carbon banks. They store more carbon - two to three times the amount of typical managed forests.

Keeton, an associate professor of forest ecology and forestry, set out to imitate the structure of the old-growth forest, while harvesting trees for timber. In his outdoor lab, foresters opened up gaps in the canopy to let smaller trees grow. They thinned around big trees to let them grow larger and faster. Trees were tipped over and left lying on the forest floor, and some were turned into "snags," standing dead trees created by two sets of careful chainsaw cuts girdling the tree trunk. Even though felled trees decay and release carbon, the process takes a long time.

Based on observations over five years, Keeton's simulations show that his technique would yield 91 percent of the above-ground carbon storage of an untouched forest after 50 years. Conventional management techniques would result in at most 79 percent, and often far less. That difference comes in large part because loggers cut down fewer trees initially.

"It doesn't do as good as Mother Nature," Keeton said. "But it still does good enough that you gain a margin of carbon storage."

Areas managed using his method would produce six more large trees per acre over half a century than with conventional forestry techniques, and two more per acre than in an untouched forest.

Another experiment is occurring in Worthington, in Western Massachusetts, where researchers cut down trees in an attempt to restore old-growth forest traits.

The primary benefit of such efforts will be to give landowners new options to create forests that are great habitat for wildlife and plants, said Paul Catanzaro, a forest resources specialist for the University of Massachusetts Extension who is involved in that study. But another purpose, he said, "is carbon sequestration - the idea of older forests and bigger trees locking up carbon."

Keeton is quick to point out that other factors outside the forest itself have to be considered when weighing the pros and cons of various forest management strategies.

But Keeton's modeling shows that even accounting for wood products made out of harvested trees, his technique is more effective at storing carbon than traditional methods.

The new focus on finding ways to make existing forests better at holding carbon could bring new economic value to the land.

"People often have a sense they want to do right by the land," said Michael Snyder, the Chittenden County forester in Vermont.

"For the forest to be healthy, and for it to be good for wildlife," he said, and - if possible - to make some money on it.

See how the new forestry technique pioneered at the University of Vermont works.
Your comment is subject to the rules of our Posting Policy
This comment may appear on your public profile. Public Profile FAQ