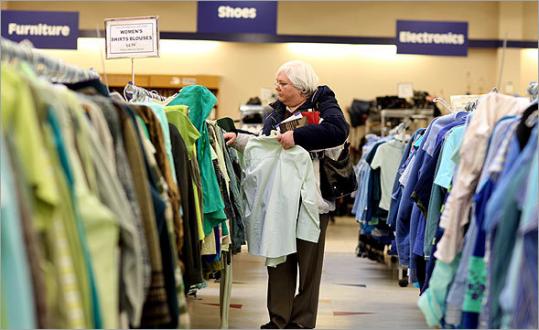 A federal law designed to protect children from lead products has caused several Masschusetts thrift stores to stop selling kids' clothing, shutting off an important shopping alternative for families struggling in this recession.

The Consumer Product Safety Improvement Act, which took effect Feb. 10, prohibits all shops from selling children's products that contain too much lead or potentially harmful chemicals. Congress passed the law in response to a series of recalls of toys and jewelry that had high lead content and were linked to several child deaths and illnesses. But the legislation applies to all children's products, including clothes, which could contain lead in metal zippers, buttons, or painted fabrics.

The sweeping nature of the law has been devastating for many resale shops nationwide, such as those run by Morgan Memorial Goodwill Industries. Unlike traditional merchants, thrift stores do not deal directly with manufacturers, which can provide proof that products meet safety standards. The regulation also applies retroactively to goods already in stores, and many thrift stores do not have funds to conduct the tests themselves.

In recent weeks, Goodwill pulled all children's merchandise from its nine stores in the state. Thrift chain Second Time Around eliminated kids' clothing from several of its 16 shops. St Vincent de Paul is currently removing children's clothing with metal zippers, buttons, and painted fabrics from its processing center, which sends out merchandise to its six stores in Massachusetts.

"Our customers are concerned because they've come to rely on Goodwill for these items," Morgan Memorial Goodwill chief executive Joanne Hilferty said yesterday. "We expected that thrift stores would be exempt from the law for a period of time. But we're not. It's an interesting example of unintended consequences."

The fallout from the law is especially damaging for consumers who have increasingly visited thrift stores during the tough economic times. The National Association of Resale & Thrift Shops said members across the country reported, on average, a 35 percent increase in business in October and November, compared with the same period the previous year. Morgan Memorial Goodwill Industries had a record $1 million in sales in October, a 30 percent increase from last year. This boom is in stark contrast to traditional retailers, which saw sales fall 2.8 percent in October - the largest percentage decline since 1992.

"It's heartbreaking," said Denise Thompson, of Dorchester, who would visit the Roxbury Goodwill store almost daily to buy most of her clothes for her 3-year-old son. "There are lots of kids that need coats. Money is tight in this economy."

Thompson, pointing angrily at the former kid's section now filled with men's clothing, said she will start shopping at Sears and Marshalls for her son, but is worried her money won't go as far. Many of the children's items at Goodwill sold for $2. The chain had already eliminated toys in the fall of 2007 following the spate of recalls.

Children's clothes accounted for about 5 percent of Goodwill's revenues at the thrift stores, which are used to help fund the nonprofit's job training and career services program. Because Goodwill has replaced its children's clothes with men's clothing, the impact the shift will have on funding is unclear.

The Consumer Product Safety Commission, which enforces the new law, said that the concern, along with metal zippers and snaps that could be coated with a lead paint, involves screen printing, rhinestones, and other embellishments. The new standard limits the total lead content in most children's products to no more than 600 parts per million in any accessible part.

Under the new law, merchants must not sell any items unless they are sure of the lead content, according to Nychelle Fleming, a spokeswoman for the commission. The commission has investigators who can inspect merchants and the current penalty for violating the law is $8,000 per infraction, and that fine will increase to $100,000 in August.

"The intent was not to close down any particular stores. However, we do want to make sure that the resellers and thrift stores are making sure that their products are safe and do meet the new law," Fleming said.

Goodwill is keeping the children's clothes it pulled from the shelves and hopes to receive further clarification from the safety commission so it can return to the stores some merchandise that complies with the standards.

The law has created confusion among many merchants, according to Jon B. Hurst, president of the Retailers Association of Massachusetts trade group, and led to inconsistent results. One thrift operation has yet to clear out its clothes: But Savers, which has seven resale shops in Massachusetts, has emptied its shelves of other children's items to comply with the new law: books, cribs, crib mattresses, baby blankets, high chairs, sipper cubs, along with bath and pool toys.

"A lot of struggling families are going and looking for clothes, particularly for children, at resale stores," Hurst said. "But as more shops come to grips with this law, more and more sellers are going to pull items from the shelves to protect themselves."