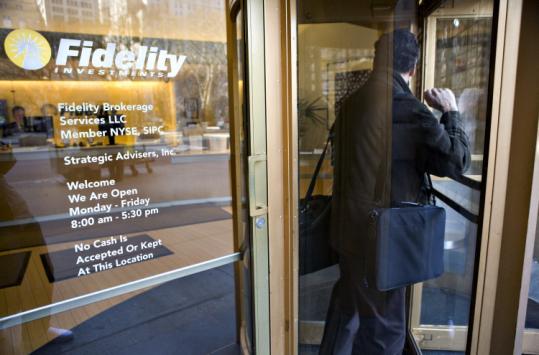 Even though his company's operating income fell 18 percent last year, Fidelity Investments chairman Edward C. "Ned" Johnson III yesterday had some unusually cutting remarks about how others in the financial services industry contributed to one of the most tumultuous periods in American economic history.

In a letter in the family-controlled firm's annual report, Johnson acknowledged Fidelity's own limited performance in 2008, when many of its well-known mutual funds tanked and total revenue fell 4 percent to $12.9 billion.

But, at a time when other financial giants have disappeared or face nationalization, Fidelity's record was a relative success story and gave Johnson a platform to vent about the decisions of competitors and regulators. He cited stock market declines that began late last year, the like of which haven't been seen since the Depression era.

"Although we ended 2008 better than a number of financial firms, it was a year of painful experience for the financial services industry, a period laced with toxic investment waste and the casual use of other people's money by a number of institutions," Johnson wrote. He added the climate was caused by well-intentioned government policies "which made money ridiculously easy to obtain" for businesses.

Elsewhere Johnson praised the economic focus of the Obama administration. But in what appears to be a reference to the massive federal spending authorized by the economic stimulus bill, Johnson wrote "we can only hope that the government's cure doesn't further sicken the patient." Dipping back into history, Johnson echoed claims that conservatives have made about the New Deal, when he wrote "government make-work projects" during the 1930s "shifted the country's cash flow away from productive businesses . . . which most likely prolonged the Great Depression."

Johnson hasn't granted an interview in years and wouldn't give one yesterday. That leaves his annual letters to provide rare insight into his thinking.

Fidelity's annual reports have grown more opaque in some ways recently. The firm no longer releases a net income figure, as it did before revamping its ownership structure to become a limited liability corporation in 2007. It last reported net profit of $1.18 billion for 2006, on revenue of $12.87 billion.

Now, operating income is the most instructive figure the company releases, which in 2008 was $2.36 billion, down from $2.89 billion a year earlier.

"In absolute terms, it was a bad year," said John Bonnanzio, who edits an independent newsletter for Fidelity investors.

Fidelity spokeswoman Anne Crowley said operating income fell much more than revenue because of one-time charges which she did not identify.

Bonnanzio said the charges likely reflected the costs of severance payments to employees. Fidelity is in the midst of eliminating at least 3,000 positions, and Bonnanzio believes the firm would have seen an even bigger drop in operating income had it not adopted such cost-cutting and other efficiencies.

"Part of the way they were able to mitigate the pounding they took is by laying off people and tightening their belts every which way they can," Bonnanzio said.

Fidelity's assets under management fell 22 percent to $1.25 trillion at the end of 2008 from $1.59 trillion a year earlier, as its mutual funds such as Magellan were pulled down by their big holdings in banks and other fallen stocks.

Magellan, for example, was down 49 percent in 2008, according to data from Thomson Reuters' Lipper funds research unit, versus a 37 percent decline for its benchmark, the S&P 500 index.

Overall, Fidelity said the performance of its stock funds was "disappointing," with just 36 percent of them beating their peers in 2008, compared to 72 percent in 2007. The company attributed the poor returns to its decision to buy riskier stocks it believed had more potential for growth, rather than buying more defensive holdings.

Johnson said the company is taking steps to improve performance, including creating small groups of analysts and managers. The firm also disclosed it will unveil a major marketing campaign this year, and said it has beefed up its lobbying arm to address policy developments in Washington.

In another direct remark, Johnson said the performance of Fidelity's big money market mutual funds group "was good, unlike the performance of a number of powerful and revered financial institutions. Fidelity and most other money market funds avoided most of the toxic waste created allegedly by certain government agencies and other sales organizations and their sales magicians."

Johnson wasn't more specific about the securities he was referring to, however, and the company didn't provide more details.