Joblessness of up to 8.8% forecast 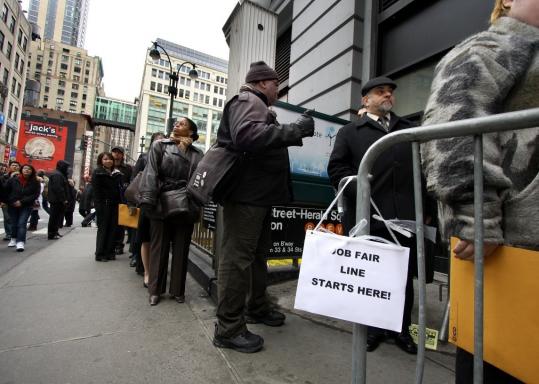 The Federal Reserve forecasts the jobless rate will decline to between 8 and 8.3 percent next year after reaching as high as 8.8 percent this year. Some economists predict 9 percent by 2010. (Craig Ruttle/Associated Press)
Globe Wire Services / February 19, 2009
Text size – +

WASHINGTON - The Federal Reserve yesterday sharply downgraded its projections for the country's economic performance this year, predicting the economy will shrink and unemployment will rise to between 8.5 and 8.8 percent.

Forecasts issued in mid-November predicted the jobless rate would rise to between 7.1 and 7.6 percent.

Many private economists believe the US jobless rate, currently at 7.6 percent - the highest in more than 16 years - will hit at least 9 percent by early next year, despite the $787 billion stimulus package signed into law Tuesday by President Obama.

The Fed also believes the economy will contract this year by between 0.5 and 1.3 percent. The old forecast said the economy could shrink by 0.2 percent or expand by 1.1 percent.

The last time the economy registered a contraction for a full year was in 1991, by 0.2 percent. If the Fed's new predictions prove correct, it would mark the weakest showing since a 1.9 percent drop in 1982, when the country had suffered through a severe recession.

The Federal Reserve's chairman, Ben Bernanke, pledged anew yesterday to do everything in his power to lift the country out of recession, while defending the extraordinary steps the Fed has taken to fight the worst credit and financial crises since the 1930s.

The central bank has slashed a key interest rate to record lows and has launched a series of radical programs in hopes of getting credit - the economy's oxygen - to flow more freely again to consumers and businesses, and to stabilize Wall Street. Such relief would help revive the economy.

"Recent economic statistics have been dismal, with many economies, including ours, having fallen into recession," Bernanke told the National Press Club. "In the United States, the Federal Reserve has done, and will continue to do, everything possible within the limits of its authority to assist in restoring our nation to financial stability and economic prosperity as quickly as possible."

The Federal Reserve's industrial production index dropped 1.8 percent to 101.3, the lowest level in more than five years. Housing starts plunged 17 percent to an annual rate of 466,000, the fewest since records began in 1959, Commerce Department data showed.

The bleaker outlook from the Fed represents the growing toll of the worst housing, credit, and financial crises since the 1930s. All of those negative forces have plunged the nation into a recession, now in its second year.

"Given the strength of the forces currently weighing on the economy," Fed officials "generally expected that the recovery would be unusually gradual and prolonged," according to documents on the Fed's updated economic outlook. Against that backdrop, unemployment will keep climbing and stay elevated for quite some time, the Fed predicted.

Fed officials anticipated that unemployment would remain substantially higher than normal at the end of 2011, "even absent further economic shocks."

Under the Fed's new projections, the economy should grow between 2.5 and 3.3 percent next year. Fed officials "generally expected that strains in financial markets would ebb only slowly and hence that the pace of recovery in 2010 would be damped," according to the Fed documents.

Fed officials, however, predicted the economy would pick up speed in 2011, growing by as much as 5 percent.

The Fed didn't use the word deflation, which is a dangerous bout of falling prices, but noted "some risk of a protracted period of excessively low inflation."