Move aims to draw leisure travelers as businesses cut back 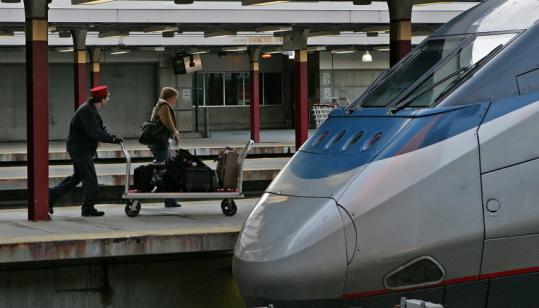 Passengers who buy their tickets at least 14 days in advance can ride between Boston and New York for as little as $79 one way. (George Rizer/globe staff/File 2008)
By Nicole C. Wong Globe Staff / February 18, 2009
Text size – +

Amtrak is cutting its lowest Acela Express one-way fares up to 25 percent to lure leisure travelers on board as the eroding economy undercuts ridership on Northeast Corridor trains usually packed with business travelers.

Passengers who buy their tickets at least 14 days in advance can ride between Boston and New York for as little as $79, down from $93. Or they can ride between New York and Washington, D.C., for as little as $99, down from $133. The sale-priced tickets are nonrefundable, are not eligible for upgrades to first-class accommodations, and must be used for travel between March 3 and June 26.

While Amtrak suspects the recession is to blame for its ridership woes, transportation researchers say America's railroad business had been sagging long before that because the trains don't move fast enough. Passenger trains often make too many stops, take circuitous routes, get stuck behind freight trains on shared tracks, and can't hit their maximum speed because they have to slow down at grade crossings and bridges.

"High speed and lower travel times are important to attract travelers," said Joseph DiJohn, a research professor and rail expert in the Urban Transportation Center at the University of Illinois at Chicago.

Still, the Acela service - the only high-speed rail in the country, designed to go up to 150 miles per hour - has been popular. In the fiscal year ended Sept. 30, 3.3 million passengers rode Acela trains, pushing the number of high-speed rail trips up 6.5 percent, compared to in the previous year.

"A good portion of our riders are business people. They've either been laid off or their companies have cut back on their operations budgets," said Amtrak spokesman Clifford Cole. "A combination of the two has caused a downturn in the ridership over the past two months."

Business traveler Dale Fisher, a Waltham event planner, said she loved riding the Acela to New York for business in October but said it's schedule - not price - that determines whether she takes a train or a plane. And she usually picks the latter, even though "our travel budgets are being looked at a lot closer now."

Acela's discount also won't prompt leisure traveler Don Cantor of Newton to return as a passenger. The retired computer science professor often drives to New York with his wife, even though he would rather take public transportation. The handful of times that Cantor rode the Acela, he was miffed passengers in the train's designated "quiet car" were being too noisy.