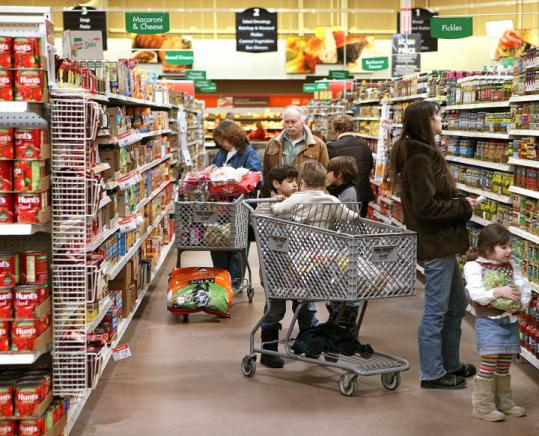 Wal-Mart Stores Inc., the nation's largest grocer, is making an aggressive push across Massachusetts to double its supermarket business over the next year.

The effort to woo more bargain-conscious Bay Staters includes the construction of a new supercenter in Worcester and the addition of markets to stores in Halifax, Hudson, Oxford, Salem, Springfield, and Swansea. A grocery addition already under construction at Wal-Mart's North Attleborough location is expected to be completed this fall.

At a time of massive layoffs and store closings across the Commonwealth, cities, towns, and residents once dedicated to derailing anything Wal-Mart are rolling out the red carpet for the discounter. Wal-Mart says its efforts will create 700 jobs at Massachusetts stores, and it is actively seeking additional store opportunities in New England, one of the last frontiers for the Bentonville, Ark., company to conquer.

"Some of the towns have joked that we're providing the economic stimulus they need," said Christopher N. Buchanan, a Wal-Mart senior manager of public affairs and government relations. "There's still a great deal of growth opportunities here."

Across the nation, Wal-Mart has pushed to convert discount stores into larger supercenters with full-service groceries. The merchant has faced opposition in other areas of the country, and New England has been a particularly tough market to crack because of limited real estate and local resistance. But Wal-Mart says it is facing fewer obstacles here these days as consumers increasingly hunt for bargains and communities look to attract businesses and jobs during these tough economic times.

In just five years, Wal-Mart has taken away about 3 percent of retail food sales in New England - or about $1 billion - from traditional stores, according to the Griffin Report of Food Marketing, a trade publication in Duxbury. Wal-Mart currently is the sixth largest grocery chain in New England with $1.5 billion in sales at its 37 supercenter stores. And analysts predict the discounter will gain market share at an accelerated pace over the next five years as it opens more supercenters across the region.

Each of Wal-Mart's new supercenters will house traditional general merchandise, such as clothes and toys, in addition to a full-service market with fresh produce, a delicatessen, bakery, dry and frozen goods, and meat and dairy departments. Retail analysts, who estimate the grocery items are often priced anywhere from 10 to 20 percent lower than at competitors, expect the supercenters to help drive down prices at rival chains and permanently alter the supermarket landscape in New England.

"The timing is right for the Wal-Mart expansion because consumers are looking for a bargain," said Kevin Griffin of the Griffin Report of Food Marketing. "It's safe to say that the top traditional grocers, the Stop & Shops, the Shaw's, are scared. Wal-Mart is a major threat because they price so competitively. And this is a business that runs on small margins anyway."

So far, rival chains with a big presence in New England have declined to comment specifically on Wal-Mart's grocery plans.

"Stop & Shop continues to offer customers great values and great food when they shop in our stores," said spokeswoman Faith Weiner a spokeswoman for New England's top grocer with about 244 stores and about $7.4 billion in sales in 2008. "We focus each day on serving customers through a great shopping experience. We don't focus on the competition, only on continuing to improve and be responsive to our customers."

Judy Chong, a spokeswoman for Shaw's, the second-largest chain in New England with roughly 200 stores and $5.1 billion in sales, said the company continuously evaluates consumer research "to ensure that we are best meeting consumer shopping needs by providing them with great overall value."

Wal-Mart's movement to add groceries will hurt existing supermarkets because of lower prices, said Al Norman, who takes credit for stopping Wal-Mart from locating in his hometown of Greenfield in the early 1990s. He said Wal-Mart will ultimately force competitors to close. He says the opposition to the company is as fierce as ever, with residents still concerned about sprawl, negative impact on local businesses, and traffic congestion.

"New England has been very hostile to Wal-Mart," said Norman, who founded Sprawl-Busters Alert, which helps community coalitions fight megastores like Wal-Mart and other large-scale developments.

But Wal-Mart, which is in the beginning of the approval and permitting process for most of the expansions, thinks New England communities are ready to embrace its supercenters.

"We're not facing the same level of opposition that we once did, given the economy, and the job we've done as a company to better explain ourselves to the community," Buchanan said.

Timothy McGourthy, Worcester's director of economic development, said the developer of the Wal-Mart project spent many months working with the neighbors and environmental groups and addressing the city's concerns. "This project was approved because it was a good project," he said.

In recent years, Wal-Mart also has worked closely with locals to organize support, including the creation of the New England Customer Action Network, which has 60,000 customers who have volunteered to help the company get out the positive word for new stores and expansion projects.

Wal-Mart shopper Edward Hamel, 78, has already agreed to show up at the next hearing for the Swansea expansion.

"I've lived in town for 50 years and I've seen the good, the bad, and the ugly," said Hamel, who has already written letters in support of the expansion. "This town needs Wal-Mart. They have a lot of good things for people who don't have a lot of money."