Forgotten in foreclosures, renters forced to live in decaying homes 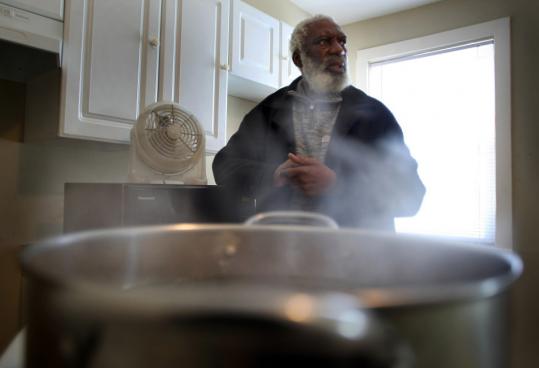 Nadia Toussaint and her two children, ages 4 and 9, have been eating takeout food for six months, ever since their stove stopped working. But that's not the only problem with their Roxbury apartment. The kitchen sink leaks, cabinets hang off hinges, and rats sometimes climb on the kitchen table or burrow into trash bins.

Toussaint said she has been trying to get someone to make repairs since last summer, when city inspectors noted problems at the two-unit building. The former landlord did not keep up the property before losing it to foreclosure last month, and the new owner, a mortgage company, has been more interested in having her evicted than offering help, according to Toussaint.

"It's really messed up," she said of the apartment. "They don't do anything about it."

As the number of foreclosures ballooned to 1,252 in Boston last year - up from 742 in 2007 - so have problems with property maintenance. Cases examined by the Globe include a new mother in an unheated Roxbury apartment, two East Boston women who couldn't find help after a water pipe burst, and a renter who scrambled to find someone to clean a flood of raw sewage in basement of her apartment.

Despite a year-old city ordinance designed to keep foreclosed properties from falling into disrepair, many lenders who have taken over properties are absentee landlords. That leaves such tenants as Toussaint, 30, to cope with decaying living conditions in apartments that, in many cases, were already substandard. Some struggle to receive basic services, such as heat and hot water, and they often don't know whom to contact in an emergency.

City officials said last month that they didn't realize Toussaint's home had gone into foreclosure because the new owner, GMAC Mortgage, failed to register the building with the city as required by the ordinance. In fact, public documents show about 27 percent of the 1,566 properties that entered the foreclosure process since the ordinance took effect last year are not registered. Without that information, it is difficult for the city to monitor property upkeep.

"We feel the pain these tenants are going through; we are working hard to hold these banks accountable and make sure these residents are safe," said Dion Irish, assistant housing commissioner for the city's Inspectional Services Department. "It is a significant concern."

Toussaint's former landlord, Freddy Fontaine, said he bought the building as an investment in 2006 for $485,000. He said that before personal financial problems last summer made it impossible for him to make the mortgage payments, he tried to comply with city maintenance requirements. Fontaine, who was not living in the building, said he believed he was no longer responsible for upkeep after it went into foreclosure.

GMAC said it mistakenly failed to register the building after the company initiated foreclosure proceedings. Jeannine Bruin, a GMAC spokeswoman, said that it was not aware of the apartment's condition but that a contact notice was posted on the building in July. After being contacted by the Globe last month, GMAC registered the property with the city and sent a representative to start making repairs.

"We don't want anybody living in dangerous or substandard conditions," Bruin said.

Toussaint has heard from GMAC representatives before - they offered her $500 to move out, she said. GMAC officials said they have no record of money being offered to Toussaint, but confirmed that such proposals, known as "cash for keys," are common. Renters are not obligated to accept the deals, city officials said, and may lose their legal right to fight eviction if they do move. Only a judge can authorize an eviction, and even then a renter may have six to 12 months before being forced to leave.

"These banks are nowhere to be found when there is any kind of problem. They only come around when they want to kick people out," said Dominic Desiaga, a volunteer with the housing activist group City Life and an East Boston resident. "This happens all the time."

GMAC, like other lenders, says it isn't set up to be a landlord, a position forced upon them by the foreclosure crisis. Cases such as Toussaint's, Bruin said, are prompting the company to review its processes to make sure tenants in buildings it owns are "adequately" housed. "This is becoming a bigger issue," she said.

State lawmakers are considering legislation for a statewide registration program similar to Boston's. But housing activists say that even if lenders register, they seldom offer a way for tenants to get in touch with them, even though they are supposed to post 24-hour contact information on foreclosed buildings.

Lawyers involved in foreclosure proceedings say they involve a maze of paperwork that often makes it hard to determine who owns a property. Even when an owner is identified, it doesn't always result in action. For example, trustees of mortgage-backed securities named on deeds do not have direct responsibility for property maintenance.

Since the start of 2008, the city has been forced to board up 193 foreclosed and abandoned properties, as part of a program called "Clean it or Lien it."

"It gets to be a complete, complete nightmare," said Zoe Cronin, an attorney at Greater Boston Legal Services who represents Toussaint. "We honestly cannot figure out whether [properties] are foreclosed or which bank owns them."

Some renters, such as Dorchester resident Marcus Johnson, are caught in a kind of ownership limbo - the landlord is gone, but the bank has not completed foreclosure proceedings.

The 70-year-old retiree is one of the last tenants in a dilapidated two-building condominium complex on Whitfield Street that has eight individually owned apartments. Within the past several months, Johnson said, he installed a new front door after vandals destroyed the old one, locked the adjacent building after hearing thieves pulling out copper wiring, and paid hundreds of dollars in water bills.

The owner of Johnson's apartment, Marie Robillard of Randolph, said she bought the unit as an investment for $240,000 in 2007, but couldn't afford the mortgage after a tenant moved out last summer. She said Johnson moved in without her permission, but a judge ordered her to either rent or sell the apartment to Johnson.

Johnson, who was living in a different unit at the complex, said he was invited by Robillard's real estate agent to move in and maintain the property after the other tenant left. He said he paid rent for two months, but his third check was not cashed.

When the heat went out recently, he plugged in electric space heaters and boiled water to keep warm. He ordered wiring to fix the thermostat and hopes to buy the property from the bank. "I want to do the right thing," he said. "I would love to pay rent."

Some say tenants such as Johnson keep foreclosed buildings from deteriorating even more. "He is taking care of everything," said Kerry Spiller, a real estate agent who met Johnson while showing the building to prospective buyers. "Banks just don't care. Once the bank has it, it doesn't matter if the heat is not on and the pipes burst and it wrecks the place."