Prosecutors: Madoff had $173m for friends 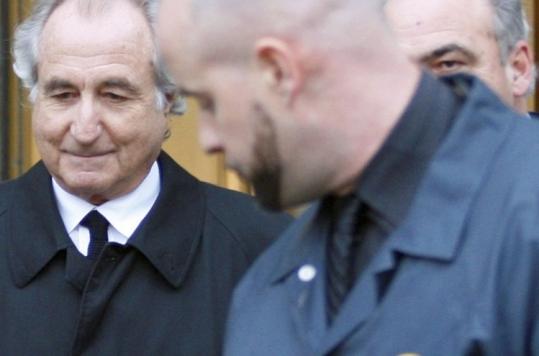 A judge may decide today if Bernard Madoff (left) will remain confined to his penthouse or be sent to jail to await trial. (Kathy Willens/Associated Press)
Associated Press / January 9, 2009
Text size – +

NEW YORK - Prosecutors said yesterday that investigators found 100 signed checks worth $173 million in Bernard Madoff's office desk, checks he was ready to send to his family and friends at the time of his arrest last month in what is alleged to be largest financial fraud in history.

The detail was provided in court documents as prosecutors argued Madoff should have his bail revoked and be jailed. They said the checks were evidence he wants to keep his assets away from burned investors in a $50 billion fraud.

Assistant US Attorney Marc Litt said Madoff can't be trusted because he engaged in a "scheme that required the defendant to lie routinely to thousands of people and a scheme which has caused extraordinary damage to individuals, families, and institutions all over the world."

The judge was expected to rule today or Monday whether Madoff could remain confined to his Upper East Side penthouse under 24-hour guard.

Defense lawyers say bail should not be revoked because Madoff is not a flight risk or a danger to the community.

Madoff delivered impressive returns to investors for decades before he told his sons it was "all just one big lie" and "basically, a giant Ponzi scheme," authorities allege.

Defense lawyers had noted that Madoff and his wife had offered to give up their assets, including four properties, in Manhattan, Montauk, N.Y., Palm Beach, Fla., and Antibes, France, along with four boats and three cars. The US properties alone were estimated to be worth more than $19 million.

Madoff's conduct "is not the conduct of a man who is unwilling to face justice in this matter," the lawyers wrote.

Meanwhile, a lawsuit filed yesterday in Manhattan sought to recover all losses, including more than $1 billion in fees, suffered by investors who were clients of Fairfield Greenwich Group in Greenwich, Conn. It invested $7.5 billion with Madoff and last month asked investors for patience, saying it will try to recover their assets.