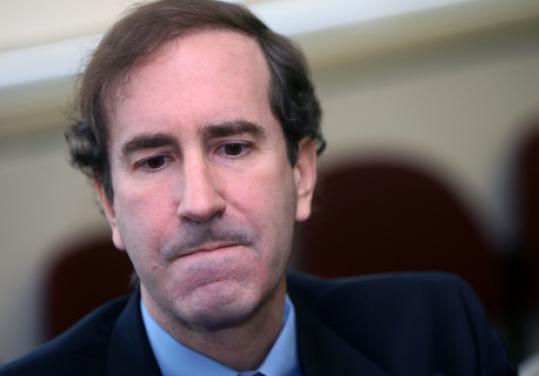 A month ago, Harry Markopolos was an accountant unknown outside Boston's financial community.

Now the slight, bookish 52-year-old from Whitman is under siege. Christmas week, he spent Monday being interviewed by "60 Minutes," Tuesday preparing to testify in Washington, and Wednesday sorting through pitches from book authors and movie producers. His mother-in-law now answers the door at his suburban stucco house and shoos away the reporters who knock at all hours.

The man who spent nearly a decade trying to blow the whistle on what appears to be the largest Ponzi scheme in history has achieved a kind of hero status within the investment world. He is poised to reap both fame and fortune from a disaster that has cost the investors of Bernard L. Madoff as much as $50 billion.

"You've spent a good part of your life trying to expose a truth, in a way few men in modern history have," one book author wrote in an e-mail to Markopolos.

Steven Pearl, a producer and writer in Los Angeles who wants to make a movie about Markopolos, said he sees "a remarkably compelling story about a guy who didn't want to be in the middle of this. It's like Cary Grant in 'North by Northwest,' where he's thrown into a case of subterfuge and espionage because of a random telephone call."

But unlike the suave Grant, Markopolos is uncomfortable in the spotlight and reluctant to take the leading-man role. He said he is uninterested in cooperating with many of the authors and moviemakers - and worries Hollywood will take liberties with the story.

"They'll just add in sex and violence," he said.

Already, the attention is getting to him. Suffering from a cold, he backed out of testifying earlier this week before a congressional committee investigating the US Securities and Exchange Commission's failure to heed Markopolos's warnings about Madoff. Markopolos is also particular about his work and felt he wasn't prepared enough for what would be his first star appearance in public. Now, the floor of his skylit home office is covered with documents and manila folders in which he's organizing the papers from his crusade.

Worried about his privacy, he declined to have his picture taken anywhere near his home. When James Segel, special counsel to US Representative Barney Frank, chairman of the House Committee on Financial Services, arranged to meet him at a pub in West Roxbury two weeks ago, Markopolos asked to see some identification before they sat down.

"You have to be sure who you're talking to," he said.

The bottom line is, Markopolos isn't eager to seize the moment.

"Why would people think I feel good about this?" Markopolos asked at one point in a series of recent interviews. "People think I'm a hero, but I didn't stop him. He stopped himself."

Harry Markopolos has never met Bernard Madoff. Instead, he stalked the famous investor through computer analysis of Madoff's supposed trading practices and returns. A Pennsylvania native, Markopolos came to Boston in 1991 to join Rampart Investment Management, a firm that specializes in the trading of options - contracts that let investors buy or sell stocks and other financial instruments at set prices. Soon, tales of how Madoff was delivering steady profits to clients regardless of market conditions had become a legend - and a mystery - in the investment world.

His bosses at Rampart were keen to learn how they could match Madoff's double-digit returns. As the office math whiz, Markopolos was assigned in 2000 to deconstruct Madoff's strategy to see if he could replicate it.

When he couldn't, the task became something of a running challenge around the office.

"I'd say, 'Hey Harry, how come you can't run a program like this?,' " said Frank Casey, a former Rampart colleague who now runs a consulting firm for hedge fund investors.

For Markopolos, though, it was no joke. Again and again he could not simulate Madoff's returns, using information he had gathered about Madoff's trades in stocks and options. Madoff seemed to make money whether stock markets went up or down, a red flag to Markopolos.

"You can't dominate all markets," Markopolos said. "You have to have some losses." Also, Madoff seemed unusually secretive, even to his own clients - another warning sign.

Markopolos eventually decided Madoff was either running a Ponzi scheme - using money from new clients to pay off old ones - or he was "front running" stocks, improperly trading in investors' private accounts ahead of orders the firm received from outside clients.

Despite receiving little response, Markopolos continued to send SEC officials memos and other notes about Madoff, even after he left Rampart in 2004 to start a business investigating financial fraud. His latest communication with the agency was in April, just eight months before the scheme surfaced: In it, he welcomed the SEC's new director of risk assessment to his job with a note about his longstanding concerns about Madoff.

Markopolos allows that at times he was motivated partly by the opportunity to receive a bounty that the government pays to whistleblowers in successful prosecutions, if the fraud falls within certain categories - the front running issue, for example. Depending on the size of the fraud, such payments could run into the millions of dollars. But exposing a Ponzi scheme probably wouldn't generate such a bounty.

Over time, Markopolos concluded that he wasn't likely to get a whistleblower payment, but he continued nonetheless, spurred on by the pure intellectual challenge of cracking a Wall Street legend, as well as the ongoing encouragement from his SEC friend, Manion, to stay on the pursuit.

The culmination of his analysis was a memo Markopolos sent to regulators in 2005 that he titled "The World's Largest Hedge Fund Is a Fraud." It outlined his suspicions in more detail and invited officials to check his theories.

"I felt like I was an army of one," Markopolos said recently. "I was a $50 billion failure. I wasn't good enough or smart enough to outmaneuver the SEC, the press wasn't listening to me, and I had no other avenue."

The SEC said it would not comment on Markopolos, and would not make Manion or others available for interviews.

But in a statement Dec. 16 that bordered on a mea culpa, SEC chairman Christopher Cox said he was "gravely concerned by the apparent multiple failures" of the agency to follow up warnings about Madoff.

Friends say such tenacity is typical of Markopolos. While pursuing a master's degree in finance at Boston College, he became upset when a financial organization switched its recommended textbook from one his teacher, Alan Marcus, coauthored, to one Markopolos didn't think was as good - but was written by an officer of the organization.

He pestered the organization about it, at one point confronting its president at an industry meeting to assert the switch was "an inside job."

"He was like a bulldog," Marcus said. "You could just see this is the kind of person taking things to the SEC. He puts it right out there."

Markopolos is hoping the buzz around him will soon die down so he can resume a low profile. He now works on whistleblower cases, conducting forensic accounting analyses for attorneys who sue companies under the False Claims Act and other statutes, which he said is best done with a certain degree of anonymity.

"It's a personality type, I guess," he said.

Added Casey, his former colleague: "He prefers to be quiet and analytical, behind the scenes. Whether or not that will be allowed to exist, I tend to think not."

His wife, Faith, who conducts due diligence of portfolio managers for an investment firm, is of two minds about the attention her husband is receiving. On one hand, it would be nice to be out of the limelight again, she mused. On the other, she said his new-found stature could help his business.

"The next time that the government sees it's Harry Markopolos bringing something to their attention," she said, "they won't ignore it."