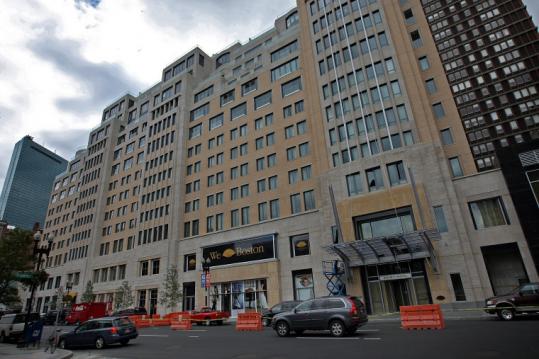 Ten condos are on the market at Boston's Mandarin Oriental. None are selling for less than original purchase price. (DAVID L. RYAN/GLOBE STAFF/FILE 2008)
By Jenifer B. McKim Globe Staff / December 18, 2008
Text size – +

Ten of the 49 condominiums at the luxury Mandarin Oriental Boston are on the market less than three months after the downtown residences opened.

And while four owners already have reduced their asking prices, the multimillion-dollar condos are still priced equal to or higher than what they originally sold for, according to Listing Information Network Inc., a Boston real estate listing service.

The Mandarin's developers say the number of units for sale is not unusual in the luxury market. Buyers signed purchase and sale agreements years before the Boylston Street building broke ground, even though closings began Oct. 6 for homes priced between $2 million and $14 million. The complex also includes the upscale Mandarin Oriental hotel, which opened in October.

The 10 condos are listed for between $2.2 million and $17 million and all of the owners are asking more than the original selling price - even with the price reductions - although it's unclear how much they paid to make improvements.

"People's lives change in five years," said Lisa Pollack, a spokeswoman for developers CWB Boylston. "I don't think anybody is losing money on these sales."

Roberta Orlandino, a Boston real estate agent who represents some of the sellers, said some bought their condos as investments. Two who put their units on the market in October dropped their prices this month: one from $5.6 million to $5.2 million, and the other, Ronald Agel, dropped his price from $7 million to $5.5 million.

A third owner, John Halvorson, started advertising the sale of his condo in January, seven months before he took ownership. He dropped his price from $7 million to $6.8 million.

The owners of the fourth reduced-price unit, Steven and Kathleen Haley, are now seeking $10 million, down from $12.5 million. Kathleen Haley declined to comment, and the other sellers could not be reached.

"Maybe people want to be more realistic and want to get to their goal in terms of selling," Orlandino said. "There's definitely a demand. The luxury market has been very strong."

Boston developer Curtis Kemeny agreed with that assessment, saying that 57 of his 63 luxury lofts at 285 Columbus, with an average price of $1 million, have sold since coming on the market in May.

"The downtown condo market for 2008 is actually doing OK," said Kemeny, chief executive of Boston Residential Group. "I say a flat market is actually pretty good is this environment."

The downtown luxury market has actually seen a slight uptick in average and median price, said Debra Taylor Blair, president of Listing Information Network, and that there is a shortage of quality inventory.

Boston real estate agent Tracy Campion represents two clients who are selling their Mandarin Oriental condos. She said they both love the units but life changes took over.

"I think it will be an extremely successful building," Campion said. "It puts us on the pay map and makes us more of an international city."