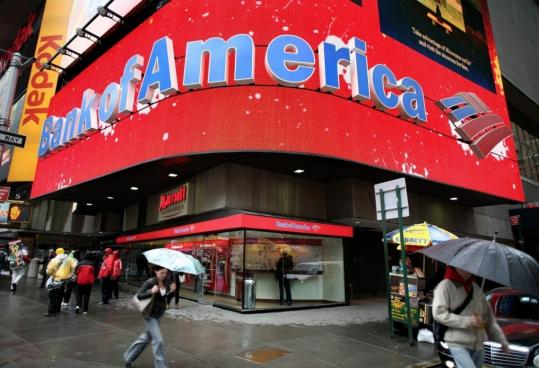 The financial picture has changed at Bank of America Corp. with the purchase of Merrill Lynch & Co., Countrywide Financial Corp., and LaSalle Bank within little more than a year.
By Ross Kerber and Todd Wallack Globe Staff / December 12, 2008
Text size – +

Bank of America Corp. yesterday said it plans to cut up to 35,000 jobs over the next three years, about 10 percent of its workforce, as it absorbs its $50 billion purchase of Merrill Lynch & Co. and a rapidly weakening economy.

The cuts by the Charlotte, N.C., bank are among the largest by any financial firm since the housing and credit crisis earlier this year pitched the economy further into recession. They also vividly emphasize the vast scale of layoffs by companies in the face of what many economists forecast will be the longest slowdown to hit the nation since World War II.

In November, Citigroup said it would reduce its worldwide employment by more than 50,000, and Sun MicroSystems disclosed plans to cut 6,000 workers, 18 percent of its workforce. Also yesterday, the US Labor Department reported that new claims for unemployment benefits reached their highest level since the 1982 recession.

"We're going to see a lot more bad news over the next several months," said Michael Widmer, president of the Massachusetts Taxpayers Foundation, who predicted the state will be hit hard because the financial sector has long been a pillar of the local economy. "No one is immune. It's like an avalanche."

The nation's largest retail bank, Bank of America is also the largest retail bank in Massachusetts with 309 branches and 8,000 employees. Among operations in Boston are its wealth and investment management divisions, which includes the Columbia Management mutual funds unit and US Trust, its private banking business for wealthy customers.

Bank of America said it won't have specific details of where the job cuts will be, or how many will be in New England, until early next year. It did say that whenever possible it will eliminate positions through attrition rather than layoffs.

"At this point, we don't foresee either the relocation of major business groups or the closing of major facilities in New England," said spokesman James Mahoney.

US Representative Barney Frank, chairman of the House Financial Services Committee, has long pushed to have Bank of America meet its promised employment levels in Massachusetts following its purchase of FleetBoston Financial Group. The Newton Democrat predicted the number of job cuts would be smaller in Massachusetts because the bank does not have many employees from Merrill or another company it recently acquired, Countrywide Financial Corp., located here.

"So given the rationale of the cuts, they should be less than proportionate" on regional employees, Frank said. "They can't use the consolidation and results from buying Merrill as a reason to reduce employees here," he said.

Frank said the size of the cuts is confirmation of how bad the economy is and provides further evidence of the need for Congress to pass a massive spending plan to stimulate the economy.

Kofi Jones, a spokeswoman for the administration of Governor Deval Patrick, said in a statement, "We will continue to work closely with Bank of America during this period of economic uncertainty. Given that Massachusetts is the headquarters of Bank of America's private wealth management sector, we hope the potential impacts on Massachusetts employees will be as minimal as possible."

Since November, other major local financial firms announced sizable layoffs, including 3,000 by Fidelity Investments, and up to 1,800 jobs by State Street Corp., about 6 percent of its total workforce.

Cathy E. Minehan, formerly head of the Federal Reserve Bank of Boston, said the scale of reductions indicates that financial firms expect it will be months, if not longer, before business begins to recover from the effects of the credit crisis and economic downturn.

"They're coming to grips with the fact they'll have to downsize to make sense of what their revenue will be for next year," she said.

Bank of America had hinted at job cuts following its shotgun marriage with Merrill in September, which saved the storied New York investment firm from the fate of competitor Lehman Brothers Holdings, which collapsed into bankruptcy.

But the scale of the bank's announced cuts was still a surprise. Gary Townsend, a principal of a Maryland investment firm that specializes in financial stocks, said the numbers reflect how big Bank of America had become after acquiring Merrill, Countrywide, and LaSalle Bank in Chicago within little more than a year.

"Bank of America has an awful lot on its plate," said Townsend, whose firm owns shares in the company. Making sharp cutbacks, he said, "is what Bank of America does when it acquires."

The acquisition of Merrill, with 60,000 employees, has affected the bank's Boston operations, where many of the company's highest-paying positions in Massachusetts had been at the global wealth division. In a reshuffling of top investment-related positions, many went to former Merrill executives who are based in New York.

The bank also moved the head of global wealth, Keith Banks, to New York in October but said its major operations would remain here. Two of the company's top executives remain in Boston. They are marketing chief Anne Finucane and Brian Moynihan, recently named general counsel.

Bank of America was one of the first companies to receive US taxpayer funds as part of the novel plan by the Treasury Department to invest directly in financial institutions to spur lending and economic activity. But Frank said that in exchange for receiving $25 billion, Bank of America should not be required to preserve jobs.

"In fairness to them, what we told them is it's for lending. The capital infusion isn't a jobs program," Frank said yesterday.

Ross Kerber can be reached at kerber@globe.com; Todd Wallack at twallack@globe.com.