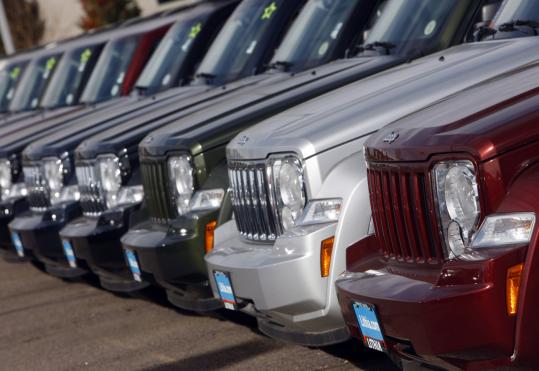 SOUTHFIELD, Mich. - US auto sales plunged 37 percent in November to the lowest annual rate in 26 years as the recession and Detroit automakers' aid pleas kept buyers away from showrooms.

General Motors Corp. tumbled 41 percent, the second drop of that size in as many months. Toyota Motor Corp. fell 34 percent, the most since 1987, while the 47 percent slide for Chrysler LLC was the worst since at least 1981, according to research firm Autodata Corp. All the major automakers said deliveries fell.

The results showed the strain of the deepening economic slowdown and GM's disclosure last month that it may run out of operating cash in 2008. GM, Ford Motor Co., and Chrysler gave Congress their plans yesterday for $34 billion in federal loans.

"When you think of the psyche of the American consumer right now, it's bad," said Rebecca Lindland, an analyst with IHS Global Insight in Lexington, Mass. "And until we start seeing some help from the economy, we are going to keep seeing months like this."

US sales slid to 746,789 cars and light trucks from 1.18 million a year earlier. It was the 13th straight monthly drop, the longest slide in 17 years.

The seasonally adjusted annual rate was 10.2 million, compared with 16.1 million a year earlier and 10.6 million in October. Woodcliff Lake, N.J.-based Autodata said the figure was the lowest since October 1982. Analysts and economists surveyed by Bloomberg had projected a November rate of 11 million.

GM's sales of cars and light trucks collapsed to 153,404 vehicles.

Deliveries fell for each of GM's eight divisions, including a 64 percent decline for the Hummer sport utility vehicle unit that the Detroit automaker is seeking to sell. The top-selling Silverado pickup lost 23 percent of its sales from a year earlier.

GM disclosed a preliminary plan for cutting first-quarter North American output by 32 percent to 600,000 vehicles, while Ford said it would slash production in the region by 38 percent to 430,000.

Ford's sales total plummeted 31 percent to 123,222 units, with sales falling at all four US brands. The biggest decline was 46 percent for Volvo, which Ford is considering selling.

At Toyota, only the new Sequoia and Lexus LX SUVs recorded sales gains, with every other model across the Toyota, Lexus, and Scion line falling as deliveries slid to 130,307.

Chrysler, based in Auburn Hills, Mich., said sales slid 47 percent to 85,260 cars and trucks. That was the steepest decline in monthly sales figures since 1981, according to Autodata.