THIS STORY HAS BEEN FORMATTED FOR EASY PRINTING
Shutting the stores

As retailers reel, a call for the liquidators 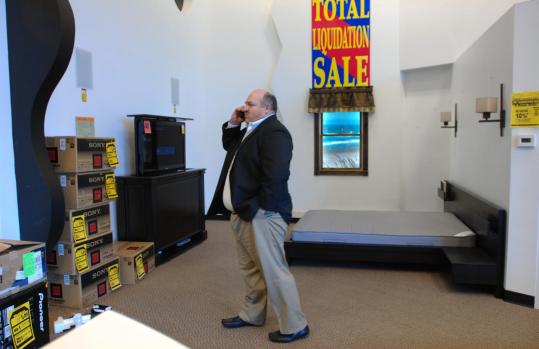 David Spehar is part of the shock troops: They parachute in, quickly sell off every asset, and close companies for good. (Josh Reynolds for the Boston Globe)
By Jenn Abelson Globe Staff / November 30, 2008
Text size – +

It was 10 a.m. in Indiana when David Spehar got the call: Tweeter was unraveling fast and he needed to get to Boston immediately. Spehar hopped into his pearl-white Escalade, already packed with laptops, printers, two suitcases, and some "Going out of Business" signs, and drove 15 hours to his bosses' office, Hudson Capital Partners, ready to roll.

Executives at the liquidation firm briefed him on the situation: Tweeter had run out of money. Spehar, nicknamed the "junkyard dog," would lead the effort to shut down the chain's 94 stores nationwide. The going-out-of-business sale would begin the next day.

As the credit crunch and economic slowdown drags down merchant after merchant, liquidators like Hudson Capital are having a banner year. Major retail bankruptcies - more than two dozen so far this year - have tripled compared with last year as merchants who built too many stores and relied heavily on credit have been hit hard. Distressed retailers can't borrow money to finance a turnaround. Potential buyers cannot get loans to purchase floundering chains.

That's when liquidators step in. They typically put up millions of dollars of their own money to buy assets from struggling merchants and guarantee creditors payments upfront, usually as part of a bidding process in bankruptcy court. Spehar is part of the shock troops: They parachute in from anywhere, quickly sell off every asset - sweaters, hangers, delivery trucks, desks at headquarters - and, in a matter of weeks, close for good companies that took decades to build.

But it's not that simple. Liquidators need to motivate employees who are losing their jobs to sell merchandise faster and better than they did when their jobs were safe. Companies like Hudson Capital must price the goods and time the discounts precisely so they can earn the amount they promised - and make a profit. Along the way, they bear the brunt of the anger of employees who see them as vultures finishing off their jobs and irate customers who have lost deposits, and can no longer use gift cards or return merchandise.

Over the past year, Hudson Capital has helped liquidate nearly 2,000 stores - almost 10 times more than in 2007 - from onetime giants such as Linens 'N Things, Steve & Barry's, Tweeter, Mervyn's, and Norwood furniture chain Domain Home. Hudson Capital's sales revenues grew from $450 million to $2 billion. During the past 12 weeks, Hudson Capital has added 100 workers to its staff, mostly in the field, for a total of 200 employees. And the deteriorating economic environment means business could double next year.

Jim Schaye, who launched Hudson Capital in Newton in 2004 with several former colleagues from Gordon Brothers, a major liquidator in Boston, calls his business legitimate, but misunderstood.

"We're like a S.W.A.T. team coming in and we get everything cleaned up," said Schaye, who serves as chief executive of Hudson Capital. The firm is one of the industry's biggest firms by number of deals, and a majority of it is owned by a hedge fund. .

"I never took enjoyment from walking through an empty store and watching people lose their jobs," Schaye said. "But someone has to do it."

Schaye didn't always believe in the industry. His family used to own the Raymond's department store in Downtown Crossing and he planned to join the business when he graduated from college in 1972. But the shop filed for bankruptcy protection that year, and liquidators from Schottenstein Stores Corp. shut down Raymond's.

His father, James, went to work for the liquidators but the younger Schaye still wasn't convinced. Instead, he got a job at Federated Department Stores, which ran Filene's and other chains. Two decades later, he reluctantly joined Schottenstein, intrigued by his father's success.

At first, Schaye's wife was embarrassed to call him a liquidator and described him to friends as an asset disposition specialist. Even now, Spehar, who lives in Indiana, calls himself a consultant and his business card more cryptically describes him as managing director of fixed asset distribution.

Despite the negative reputation that liquidators have, their services are constantly in need. Retailers, while usually skilled at opening stores and selecting merchandise, are not typically equipped to shutter operations, according to Arthur Perkins, president of the Turnaround Management Association, which includes liquidators, bankruptcy attorneys, and turnaround executives, among others.

Liquidators have experience calculating and timing discounts, running lean operations that are less about customer service and more about moving merchandise. They are able to sell trucks, furniture, and other assets that merchants are not used to hawking. And in some cases, liquidators will cover expenses merchants can no longer afford as their businesses wind down: paying employees, the rent, the electric bills. On big deals, rival liquidators will often work together in a joint venture to spread around the risk. Not every deal is a winner. Hudson Capital lost a few hundred thousand dollars in September when they overestimated what they could recover from a mattress dealer in Washington.

Lately, Spehar has been spending about 70 hours a week in the locked and mostly empty Tweeter headquarters in a Canton office park. He sits in an office next to one the chief executive used to occupy, checking sales at every store three times a day and dealing with employee theft problems, which happens in many liquidations as soon-to-be fired workers pilfer merchandise or cash from the stores. He holds conference calls with store managers and partners at the company on whether to accelerate discounts or increase incentives for managers and employees.

When liquidators begin a sale, they typically take discounts off the original price, which is how the merchandise was valued, according to Spehar. So if a $50 item was on sale for $40 a day before the liquidation began, it goes back to the original price and is then discounted. The sales increase every week, sometimes more frequently if goods aren't selling. Tweeter added an extra 10 percent to its 10 percent promotion during the early weeks to help keep up the momentum. The current 40-70 percent discounts will increase tomorrow to 50-80 percent. As stores sell out of merchandise, shops are closed and employees laid off.

The "junkyard dog," as Schaye affectionately calls Spehar, is actually a nice guy. He's pleasant. He buys doughnuts for the employees. He talks to his wife four times a day. He may be presiding over the impending unemployment of everyone around him, but Spehar likes to call himself a people person.

"We're the messenger, not the message," Spehar said.

On the weekends, Spehar spends several hours visiting different stores, making sure the shops are neat, the merchandise is moving, and the signs are prominent. At the Tweeter in Dedham last Sunday, Spehar hired workers to wear signs and walk along Route 1 promoting the liquidation sale.

Inside, Patrick Kavanaugh, the Dedham store manager, said it was shocking and scary when the liquidators first took over. He said the incentives have helped to motivate employees - most are earning more money now than they once received under Tweeter. For example, managers are receiving up to $300 extra weekly based on sales. Other employees are now earning 5 percent of everything they sell, better than the 5 percent of profit under Tweeter.

But the promotions have also changed the ambience in Tweeter. Now, Kavanaugh said, it feels like a Wal-Mart.

Spehar keeps on smiling. The job is almost done. He shuttered six stores last weekend, another 20 this weekend, and the last round is next week. Tweeter will close its doors for good next Sunday. Spehar will finish up payroll, hand over the keys, and tie up other loose ends.

And then it's off to the next stop: Wyoming, to take down western clothier Boot Town.