McDonald's getting cheesy when it comes to $1 menu 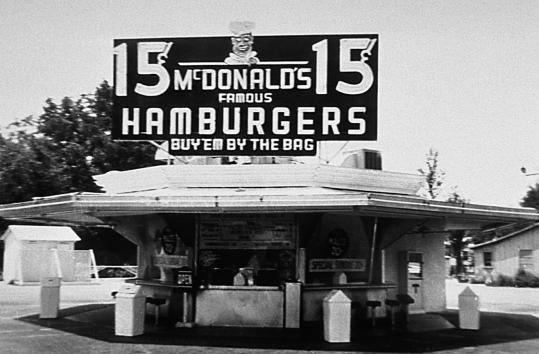 The original McDonald Brothers restaurant in San Bernardino, Calif., in this undated photo. Their slogan ''buy 'em by the bag'' was a more palatable suggestion when hamburgers sold for 15 cents each. (MCDONALD'S)
Bloomberg News / November 26, 2008
Text size – +

GREENSBORO, N.C. - McDonald's Corp. will increase the price of its $1 double cheeseburger to $1.19 in December to cover rising costs, ending the sandwich's run as the top-selling item on the six-year-old dollar menu.

The world's biggest restaurant company will replace the double cheeseburger with the McDouble. "The new sandwich consists of two beef patties and a single slice of cheese, or one slice less than the double," Greg Watson, McDonald's vice president of US marketing, said yesterday.

Restaurant operators spend about 6 cents on a slice of cheese, an expense that emerged as the focus of franchisees' pressure on McDonald's to raise dollar-menu prices for the first time. Chief executive Jim Skinner and chief operating officer Ralph Alvarez met with franchisee leaders last month as part of efforts to cover higher costs while preventing customers from switching to rivals' cheaper burgers.

The price of cheese was "part of the driving factor that said we need to be smart about the changes and find a solution that's going to keep our customers happy as well as make sure our owner-operators are financially sound," Watson said. "This solution allows us to strike that balance."

The dollar menu, which consists of eight items that generate about 14 percent of McDonald's sales, helped third-quarter profit exceed analysts' estimates. In addition, consumers squeezed by higher food costs bought chicken sandwiches, small orders of french fries, and other $1 items during October when US comparable-store sales climbed 5.3 percent, faster than some analysts expected.

US franchisees endorsed the dollar menu changes this month, setting the stage for restaurants to change menu boards by Dec. 1, Watson said. McDonald's will start national advertising of the dollar menu on Jan. 5.

Marketing will "feature the strength of the dollar menu brand," Watson said. "We're going to talk about the variety of items you can get at $1."

The new McDouble cheeseburger "will be mentioned, but it won't be featured," Watson said. "What we want people to take away is that the dollar menu is still there. That is the broader message."

McDonald's, based in Oak Brook, Ill., plans to incorporate these changes in the 1,898 US restaurants it operated as of Sept. 30. It's recommending the changes to franchisees who run more than 80 percent of the 13,871 US stores.

"They want to maintain the dollar menu to attract the crowd looking for value," Giri Cherukuri, who helps Oakbrook Investments manage $1.3 billion, said in a Nov. 10 interview. "On the other hand, they had to do something because of costs."

Some franchisees are already charging more than $1 for the double cheeseburger and some may charge more than $1.19, said Richard Adams, a former franchisee in San Diego. He's now a consultant to about 300 McDonald's operators.

"McDonald's has no authority to tell franchisees what to charge for the double cheese," Adams said this month. "A lot of people are going to $1.39 to $1.49."

"We don't want people to feel that we've somehow done something to the double cheeseburger," said Watson, McDonald's lead executive on the value task force. Bill Brown, an operator in Lancaster, Pa., represented franchisees. "It is going to cost more, but the double cheeseburger is still there," Watson said.