Antiroll technology key for all vehicles 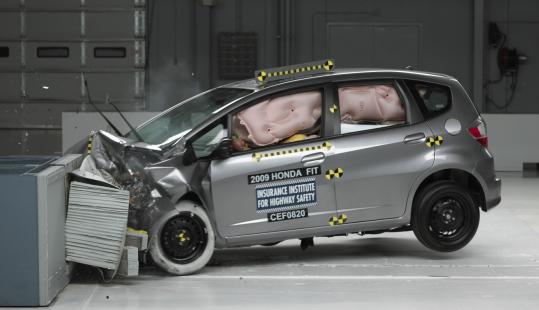 The 2009 Honda Fit with electronic stability control was the first minicar to make the Insurance Institute for Highway Safety's list of safest cars in front, side, and rear crashes. (Associated Press)
Associated Press / November 25, 2008
Text size – +

WASHINGTON - Dozens of new cars and trucks, led by models from Ford Motor Co. and its Volvo subsidiary, made the insurance industry's annual list of the safest vehicles, helped by the growing adoption of antirollover technology.

For the 2009 model year, Ford and Volvo have 16 vehicles on the Insurance Institute for Highway Safety's list of the safest cars, followed by Honda Motor Co., with 13 vehicles, the institute said today.

"No matter what kind of vehicle buyers may be considering, now they can . . . find one that affords the best overall protection in serious crashes," said institute president Adrian Lund.

The vehicles are tops in protecting people in front, side, and rear crash tests based on institute evaluations. The vehicles are required to have electronic stability control to qualify.

It also includes the Mazda Tribute, which has the same underpinnings as the Escape and Mariner.

The awards bolster the case made by Ford chief executive Alan Mulally in Washington last week when he argued that Ford had made significant strides.

Honda and its Acura unit had vehicles in nearly every category, including top sellers such as the Honda Accord, Honda Civic 4-door with optional ESC, and Acura MDX and RDX mid-size SUVs, and Honda Fit with optional ESC. The Fit is the first minicar to earn the safety award.

Volkswagen AG and its Audi brand had nine vehicles on the list, including the VW Jetta and Passat and the Audi A3, A4, and A6.

Toyota had the Corolla with optional ESC, RAV4, Tacoma, Tundra, and Scion xB.