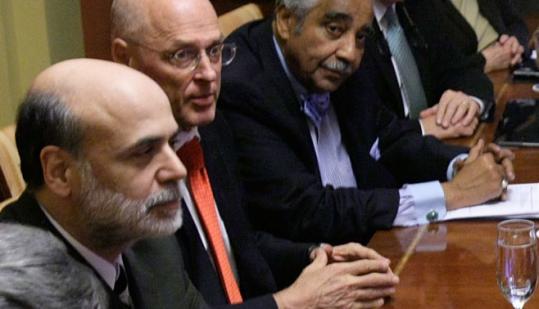 On the same day the government said it has supplied $33.56 billion to 21 banks in a second round of payments from the $700 billion rescue program, the Bush administration told congressional aides it won't ask lawmakers to release the second half of the $700 billion, people familiar with the matter said.

The administration of President Bush ends in less than 10 weeks, and a delay in submitting a request to lawmakers would leave it to President-elect Barack Obama to tap remaining funds in the bailout fund.

"I think it is the right thing to do," Senator Richard Shelby, top Republican on the Senate Banking Committee, said yesterday. "I think we need to debate this. I think the American people need to know where the first $350 billion went, who benefited from it."

Also, the Treasury Department set a deadline for another 3,800 banks to apply for funds. Treasury said a category of privately held banks will have until Dec. 8 to apply for the government to purchase shares of their stock.

Treasury informed Congress there would be no notification seeking the rest of the bailout funds this week, and didn't go beyond that, a department spokesman said yesterday. Treasury Secretary Henry Paulson has no timeline for accessing the second $350 billion, the spokesman said.

The department has so far committed $290 billion of the $350 billion that was released for a program aimed at injecting capital into a wide spectrum of banks and insurer American International Group. Paulson's initial proposal called for using that money to buy troubled assets from the firms, and he's been criticized for shifting the focus of the program. Last week Paulson repeatedly declined to answer when and whether he would go to Capitol Hill for the rest of the funding.

He told The Wall Street Journal he is unlikely to use what remains of the package, unless a need arises.

Meanwhile, a broad economic stimulus bill, which Obama wants Congress to pass promptly, is not likely to be approved by the Senate during its short legislative session this week, a top Senate aide said yesterday.

Jim Manley, a spokesman for Senate Democratic leader Harry Reid of Nevada, said he was hopeful, however, that the Senate would be able to pass legislation extending jobless benefits for the long-term unemployed.

Later in the day, Reid and Senate Appropriations Committee chairman Robert Byrd unveiled details of a $100 billion economic stimulus bill that they said would create 635,000 jobs and help domestic automakers.