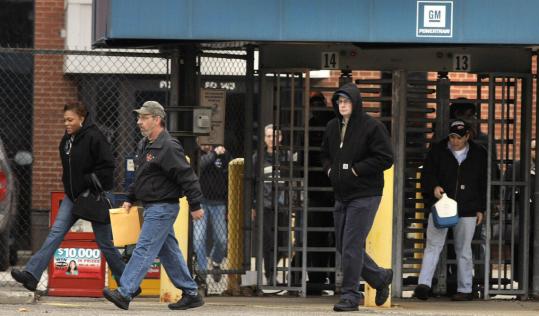 The failure of one or more of the Big Three automakers would put a huge initial dent in American manufacturing, but in time foreign car companies would pick up the slack by stepping up production in their plants here, many industry experts and economists say.

Whether Washington should let that play out - risking hundreds of thousands of jobs - is a central question Congress will weigh this week. Detroit's leaders are pushing for immediate federal intervention, before the next administration takes over.

"Barack Obama has made it clear he understands the importance of the industry. The question is, do we get that far?" Ron Gettelfinger, head of the United Automobile Workers union, said Friday, raising the prospect of a General Motors bankruptcy.

But many industry experts say the big foreign makers are established enough to take control of the industry and its vast supplier network more quickly than is widely understood.

"You would have an auto industry in the United States more like that of Mexico and Canada: foreign-owned," said Sean McAlinden, chief economist at the Center for Automotive Research, which calls itself a nonprofit organization that has "strong relationships with industry, government agencies, universities, research institutes, labor organizations" and other groups.

The transition would surely be painful. The big US companies employ about 240,000 workers, and their suppliers an additional 2.3 million, nearly 2 percent of the US workforce.

The outright failure of GM would eliminate the biggest auto employer and more than 100,000 manufacturing jobs, roughly the number already lost this year at the nation's automakers and their suppliers.

GM is appealing for a multibillion-dollar bailout to keep operating and continue the costly conversion to a leaner company producing efficient vehicles. Its collapse would probably bring down some suppliers. Since many of them ship parts and subassemblies to the other automakers, auto production could be crippled until the supply system is reorganized around newly dominant foreign car makers.

The new kings of the industry would presumably be Toyota, Honda, Nissan, Volkswagen, Ford, Mercedes-Benz, BMW, and Hyundai-Kia. (Volkswagen has not opened a US plant; BMW and Hyundai each have one plant.)

"I don't think people appreciate the importance of this backward linkage to the rest of manufacturing," said Sanford Jacoby, economic historian at the University of California.

Even in this year of plunging car sales, the automakers and their vast supplier network still account for 2.3 percent of the nation's economic output, down from 3.1 percent in 2006 and as much as 5 percent in the 1990s, according to government data. Economists say 20 percent of the shrinking manufacturing sector is still tied to the auto industry.

Rather than collapse outright, a carmaker could file for bankruptcy protection. If it obtained financing, the company could then continue operating and slim down to a more manageable size, with cuts occurring over a period of months or years. But some of its operations could be taken over by another automaker or it could even be forced to liquidate.

But if the current downturn is prolonged, it might be too late. In an industry capable of making 17 million cars a year, sales have dropped to an annual rate of only 10 million vehicles made here.