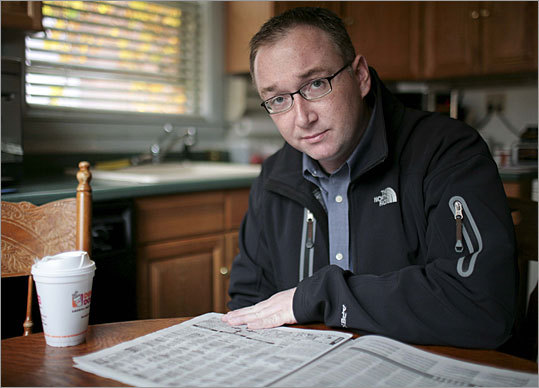 (Aram Boghosian for The Boston Globe) 'Most places won't even entertain the idea of hiring right now,' said John Coughlin, who was laid off in May from a Boston seafood wholesaler.
By Robert Gavin Globe Staff / November 16, 2008
Text size – +

After eight years as senior director of human resources and operations, Jodi Paris Anastos knew exactly what to do when she was laid off from a local biotechnology firm in July. She polished her resume. She set up interviews with executive recruiters. She networked with her industry and professional contacts.

But four months and scores of unacknowledged resumes later, Anastos, with a bachelor's degree in business and master's in psychology, is still without work or prospects. The clock is ticking on her unemployment benefits, which run out in early spring, and her savings have dwindled to almost nothing. She's even ap plied for waitressing jobs. No luck.

"It's really tough out there," said Anastos, of Ipswich, declining to name her former company. "It's like your resume falls into an abyss."

Anastos's story is becoming increasingly common as thousands of unemployed Massachusetts workers flood the job market and find few businesses hiring in the face of the economic downturn. First-time claims for unemployment benefits in Massachusetts have surged about 30 percent from a year ago, according to the US Labor Department, and the number of jobless workers in the state has jumped by more than 40,000 since April, when the unemployment rate bottomed at 4.1 percent.

In September, the state unemployment rate hit 5.3 percent, the highest since 2004, and economists expect it to climb through at least the end of next year. Moody's Economy.com projects unemployment in the state will peak in late 2009 at 6.5 percent, well above the 5.9 percent reached in the 2001 recession.

"I think we're just seeing the tip of the iceberg right now," said Jerry Rubin, president of Jewish Vocational Service in Boston, a nonprofit that provides job training and career counseling. "The real impact of layoffs has not hit Massachusetts yet."

Thanks to its strong technology, education, and health sciences sectors, Massachusetts has only begun to feel the brunt of the national economic downturn. For much of the past year, the state added jobs even as the rest of the country lost them, and its unemployment rate stayed well below the national rate, which was nearly a percentage point higher in September at 6.1 percent.

But the turmoil in financial markets and deteriorating national and global economies are taking their toll on the state. Massachusetts technology firms are projecting significant declines in sales in coming months, and several have recently announced job cuts. Last week, Teradyne Inc. of North Reading, said it would cut 185 jobs, about 5 percent of its worldwide workforce of 3,600, and Sun Microsystems Inc., of Santa Clara, Calif., which has a facility in Burlington, said it would cut 6,000 jobs worldwide.

Sun would not say how many Massachusetts workers might lose jobs.

Financial firms are cutting jobs, too, as plunging stock markets threaten profits. Fidelity Investments of Boston, for example, said Friday it will cut another 1,700 jobs worldwide in the first quarter of next year, following a recent layoff of 1,300 workers. Fidelity, which employs about 44,000 worldwide and 11,500 in Massachusetts, declined to say how many Massachusetts jobs would be cut.

Even universities, which typically do well in recessions as people return to school to update skills or stay longer rather than test the job market, are trimming budgets and curbing hiring as falling investment values batter their endowments. Boston University, for example, recently announced a hiring freeze.

As a result, jobs are increasingly hard to find anywhere. Mitsy Williams, 43, of Dorchester, has been looking since June, when she lost her job as a researcher for a financial services consulting firm. She has sent out at least 50 resumes, attended job fairs, and signed up with temporary agencies, but still no work. Meanwhile, her unemployment benefits run out in about a month. Workers can collect unemployment benefits for as many as 39 weeks.

"I am pinching pennies and trying not to stress," said Williams, who holds a two-year business degree. "But there are a lot of people looking for jobs, and not that many positions out there."

The number of job seekers using the state's 37 one-stop career centers rose 7 percent between July and October from a year ago to about 91,000, according to the state Division of Career Services. But some centers, where unemployed workers receive counseling and search listings, are experiencing bigger increases. The number of job seekers coming into the downtown Boston career center operated by Jewish Vocational Service, for example, is running at a pace about 60 percent above last year. In Roxbury, the center run by Morgan Memorial Goodwill Industries experienced a 20 percent increase in the number of clients joining the center in October, to 370 from 307 in the same month a year earlier. At the Woburn center, tucked along the Route 128 high-tech belt and run by Career Place, a local nonprofit, total traffic is up about 10 percent from a year ago, cutting across a swath of industries, said executive director George Moriarty. The number of technology workers coming into the center is up 10 percent; assemblers and technicians are up 13 percent; and retail and customer service workers are up 30 percent.

"What we're concerned about is this stronger sense that the economy's in a deeper hole," said Moriarty. "It's the lack of confidence that is really undercutting local employers and their hiring plans."

During one morning late last week, the Woburn center bustled, providing a sense of the broad impact of the economic downturn. Among those searching for jobs were Kishor Thakkar, 48, an accountant who has been able to find only temporary jobs; Michele Mahoney, 61, a legal secretary laid off from a Boston law firm after 17 years; and Will Hamilton, 65, of Charlestown, who after losing his job as operational manager at a Boston tour operator, spent the summer working on the city's waterfront as a boat captain.

When the season ended in the fall, so did his job. Now, he's looking for work in the oil industry in Texas and Louisiana.

"The job market here is too tight, and it's not getting any better," Hamilton said. "I can't afford to retire."

John Coughlin, laid off in May from a Boston seafood wholesaler, said he has lost jobs before, but was always able to tap a network of friends, associates, and other contacts to quickly find another job. Not this time.

Coughlin, 35, who completed two years of college, is studying to become an information technology project manager under a state training grant. He spends his days in class and his nights poring over job listings. He said he's sent out too many resumes to remember, but received one interview. He didn't get the job.

Married with two children, and his family's sole breadwinner, Coughlin admitted he's getting more nervous about finding a job. His unemployment benefits end in February.

"We are struggling like a lot of people, and trying to do the best we can," he said. "I have to believe that if you want work, if you are determined, you will find work. It might take a while, but you will find it."