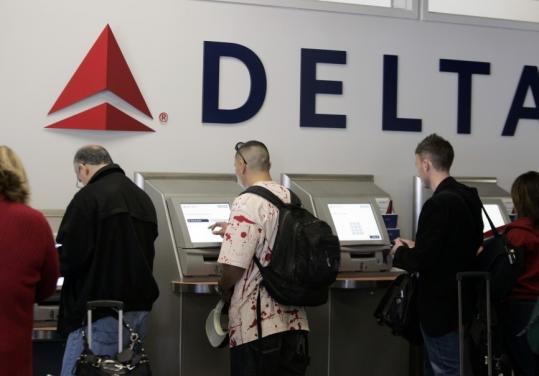 ATLANTA - Delta Air Lines Inc., the last US full-fare carrier without a fee to check a traveler's first bag, will start charging $15 for luggage as it works to boost revenue.

The move takes effect for flights on or after Dec. 5, Delta said yesterday. Checking a second bag will cost $25, half the current rate. Delta became the world's largest carrier by closing its purchase of Northwest Airlines Corp. last week.

The fee reverses Delta's plan to keep the first bag free and is among its initial moves to match Northwest's pricing on some services. Atlanta-based Delta said Oct. 29 it was adopting Northwest's policy of offering coach seats with more legroom for $5 to $25 extra.

Delta is switching to Northwest's prices for reserving tickets by phone by reducing the fee to $20, from $25. A $3 fee for curbside check-in will be dropped to align with Northwest's policy, Delta said.

Also being eliminated are fuel surcharges ranging from $25 to $100 for frequent-flier award tickets in the United States and Canada for Delta or Northwest flights. Those fees were added this year as jet fuel rose to a record $4.36 a gallon in July. Fuel has since dropped by half.

"Customers are not differentiating Delta as the only major airline not charging for a first checked bag," chief operating officer Steve Gorman said in a statement. "Delta is adopting proven practices from both Delta and Northwest that have been broadly accepted in the marketplace."

Southwest Airlines Co., the largest low-fare carrier, doesn't charge for the first two pieces of checked luggage, and has touted that in television ads and on its website. JetBlue Airways Corp. and AirTran Holdings Inc. both let passengers check one bag for free.

AirTran may make public a decision next week on whether to add a charge for the first bag, said Judy Graham-Weaver, a spokeswoman for the Orlando, Fla.-based carrier.

"We have the technology," she said in an e-mail. "We certainly need to evaluate it."

AMR Corp.'s American Airlines, the second-largest carrier behind Delta, initiated a $15 fee for the first checked bag in June, prompting most other carriers including UAL Corp.'s United Airlines and Continental Airlines Inc. to follow.