A Neiman's Christmas gift could cost you $10 million 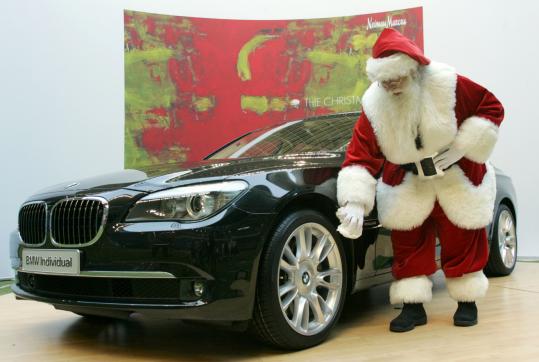 DALLAS - With stock markets sinking and fear of recession rising, what's the affluent consumer to do? Neiman Marcus hopes a few of them will splurge on diamonds, Dior, and other diversions.

The luxury retailer unveiled its Christmas Book yesterday - and made surprisingly few concessions to the financial crisis.

You can be the first on your block to own a limited-edition BMW sedan, a backyard golf course designed by Jack Nicklaus, or a collection of every top 100 record from 1955 to 1990.

"I think we all need a break," said Ginger Reeder, a Neiman vice president. "These gifts are not meant to be anything more than something to make you smile."

Neiman plans its holiday book more than a year in advance. Reeder said the only change this year is that Neiman also will send out a smaller catalog featuring gifts under $300. The privately held chain doesn't discuss sales from the Christmas Book, first published in 1926.

Chief executive Burt Tansky said at the time - before the $700 billion federal bailout - that Neiman's customers were heavily invested in the stock markets. "We are anticipating the months ahead will be difficult," he said then.

But company employees note that the Dallas-based chain has survived other downturns, most recently in 2001, when it canceled the book party - but not the book itself - after the Sept. 11 terrorist attacks.

This year's catalog is filled with furs, fashions, fancy handbags, and jewelry from upscale designers.

For $10 million, you can buy a stable of 12 to 15 thoroughbreds and have them stabled, trained, and managed by Three Chimneys Farm in Versailles, Ky. Will anyone pony up?

"We'll see," said Case Clay, Three Chimneys' president. "Everybody has a little concern, but what better time to have a little levity and fantasy?"

If the horsey life is too rich, $1 million will get you three golf holes designed by Nicklaus's team, and the Golden Bear himself will play the first round with you.

If you're a sports fan on a budget, maybe the $110,000 Harlem Globetrotters package is for you. You'll suit up, learn five key tricks from the players, and get in a game. Buckets Blake, a guard, promised his teammates can make even the most unskilled basketball player a star for one night.

"We improvise real well," he said.