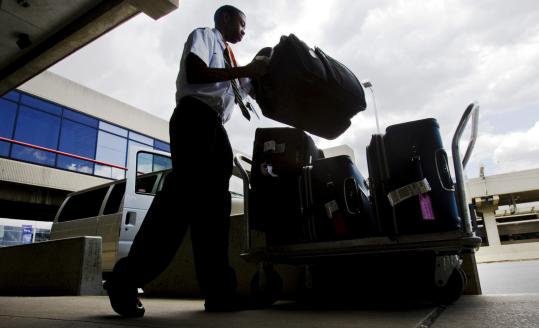 ATLANTA - American Airlines and United Airlines passengers are burning through record numbers of frequent-flier points to avoid paying higher fares. The seat giveaway is good news for the biggest US carriers.

Airlines are adding surcharges of as much as $100 on frequent-flier tickets. They're also speeding the drain on passenger mileage accounts by expanding the supply of free seats and demanding more points for some flights.

The payoffs are deeper customer loyalty, eliminating millions of dollars in liabilities for unused awards, and getting more money from credit-card companies including JPMorgan Chase & Co. Banks spend an estimated $4 billion a year on airline miles for credit-card rewards and have bolstered the cash positions of United and Continental Airlines Inc.

Carriers are raising mileage requirements after a 43-percent jump in jet-fuel prices over the past 12 months. Rising fuel costs contributed to $5.6 billion in second-quarter net losses among the country's five largest full-fare airlines. That followed $11.5 billion in first-quarter losses.

With domestic ticket prices up 20 to 40 percent at the major airlines this year, according to FareCompare.com, travelers have even more incentive to seek free seats.

For Dan Berman of Atlanta, obtaining a one-way Delta coach ticket to Tel Aviv for his 18-year-old son meant using 80,000 points. He says he needed just 50,000 for round-trip overseas flights a couple years ago.

"It makes no sense to sit on these miles anymore," said Berman, 46, chief executive officer of Atlanta-based marketing firm PharmaCentra LLC. He has redeemed 350,000 Delta points in 2008.

Redemptions in 2008 are running ahead of last year's pace, when airlines distributed a record 10.9 million free trips.

"We certainly do encourage customers to utilize their miles," said Rob Friedman, president of marketing for American's AAdvantage program. "It's a great way to engender loyalty and hopefully more return trips."

Unused awards are accounted for on the carriers' books as "deferred," "unrecognized," or "unearned" revenue. They amount to a liability because the free travel must eventually be delivered.

About half of all points earned for travel don't come from flying, according to IdeaWorks. The consulting firm estimates that card companies' annual point purchases from the full-fare carriers, plus Alaska Air Group Inc. and US Airways Group Inc., total about $4 billion, or 3.8 percent of their $104.2 billion in 2007 sales. That helps airlines add revenue beyond fares.

Chicago-based United said last week it will get $1.2 billion in additional liquidity from JPMorgan's Chase Card Services under an extended frequent-flier agreement and the advance purchase of miles. Houston-based Continental said in June that it would receive $413 million from Chase for miles and other marketing commitments.