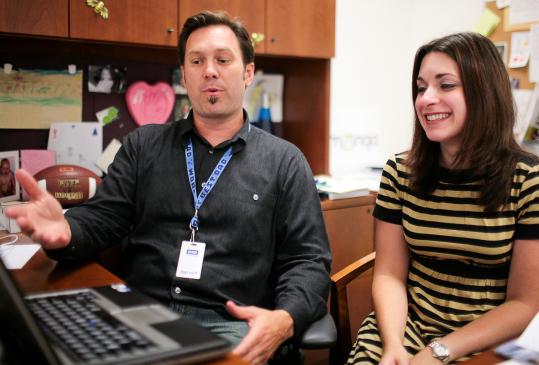 What if your resume also showed recruiters and employers your Rolodex? Or what if your circle of professional contacts could all see your career history - including references?

Picture this and you'll begin to see how millions of people are using online social networking sites such as Facebook, MySpace, and LinkedIn as an innovative, albeit sometimes risky, career development tool. By allowing users to communicate with each other and share media-rich information, such sites expand circles of contacts, connect people to job or business opportunities, and even provide informal sources of career advice. The ever-expanding social networking marketplace offers exposure, with all the gains and drawbacks that unbounded visibility entails.

Take for example Aaron Strout, a veteran blogger, energetic online networker, and vice president for social media at Mzinga Inc., a Burlington firm that helps companies infuse their websites with community-building tools such as message boards and blogs.

Strout's profile on LinkedIn, the four-year-old dominant networking site for professionals, served as his initial resume when he applied for a job at Mzinga two years ago. Later, he followed up with a traditional paper resume. As well, he's beginning to find and check out prospective new hires on networking sites, where users post a wide spectrum of information on their personal Web pages, from job histories, photos, and blogs to rosters of friends and other contacts.

"I can see how good a writer you are, I can see your network," says Strout. "It gives a much fuller, richer picture of who someone is."

It wasn't all that long ago that such sites were just cyber-playgrounds for college kids and teens. Pioneering sites such as Facebook and MySpace still mainly offer virtual bulletin boards where users can post photos and comments, join each other's "friends" lists, and hang out - virtually.

A growing number of companies are getting in on the game by using social networking sites to reach customers and new hires.

"Facebook provides us with an opportunity to show our fun environment with pictures, comments, and discussions," writes financial services Ernst & Young on an official Facebook page that is heavily aimed at connecting with interns, given the social networking site's youthful audience.

In the search that led to her current job at Mzinga, new public relations manager, Susan Koutalakis saw an online job posting in July, then asked Strout, an acquaintance, about the job informally through Twitter and Facebook, before finally applying. "Some people are very hesitant to use social media in a job search," says Koutalakis, who started work at Mzinga last week. "But it's a great way for employers to get to know you in a different situation."

But that's why it's also crucial to post judiciously on social media of any kind. Even if you use privacy settings to screen traffic to your page, online networking spreads your info further than you might imagine, as users spread content from one to another with viral speed. And the information on sites such as Facebook that were originally designed for freewheeling college students is often revealing in the wrong ways.

"I had this great bikini shot from my honeymoon in April that I wanted to post on Facebook, but I thought, wait a minute, you never know who's going to be looking at you," says Lindsey Pollak, a New York-based career advice blogger active on Twitter, Facebook, and LinkedIn who is the author of "Getting from College to Career."

Some students have lost job offers because of inappropriate Web content, says Maria Stein, director of career services at Northeastern University. Recently, a Northeastern student commented on MySpace that she was going to accept a job at a company that didn't thrill her. After a friend also posted a derogatory comment about the prospective employer, the company rescinded the student's job offer. "No matter what site they're on, we're always telling them to be mindful of what they put on," says Stein.

Even LinkedIn, which has 26 million members, demands thoughtful navigation. A half-completed profile can seem sloppy. Too many connections may seem over-eager to some, a mark of success to others. In searching the site recently for new hires for his growing sales staff, Evan Gotlib quickly clicked past a guy who posted a photo of himself in jeans and T-shirt.

"I'm not going to hire that guy - he didn't take the time to put himself in a tie and a shirt," says Gotlib, advertising director for IdealBite, a site that delivers daily eco tips to users. Gotlib visits LinkedIn up to six times daily to connect with clients and colleagues, and once found a job on the site. "I can't imagine being without it."

So far, employers are divided on social media's usefulness. A third of employers consider such sites a drain on productivity, according to a July survey of human resource professionals by Chicago-based consultants Challenger, Gray and Christmas Inc. Nearly a quarter of companies surveyed block the sites entirely, partly out of security concerns.

Still, as much of our social lives migrate online, so too will business networking. Social sites can be used to meet work colleagues within your own company. And more people are joining or founding "groups" on the sites to bring together those with similar interests.

Career coach Maggie Mistal recently started a group for her own clients on one social networking site, and she scans her online contact lists regularly to glean news of career moves and other changes that that her contacts have posted about themselves.

"For a lot of people, just getting on these sites is enough, but there's so much more that you can do," says Mistal. "It's a great tool, if you have a strategy and a point. Like any tool, it has potential for good and evil."

Maggie Jackson, author of "What's Happening to Home: Balancing Work, Life and Refuge in the Information Age," can be reached at maggie.jackson@att.net.