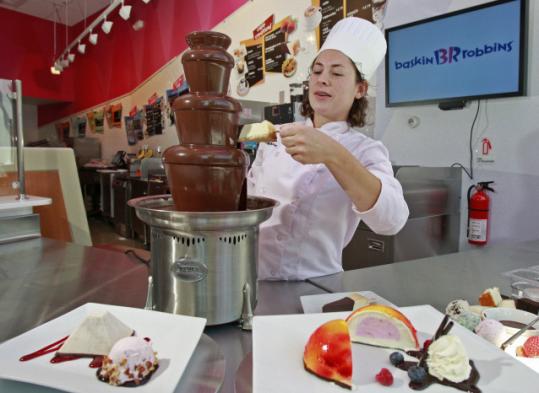 With a pastry chef at the helm, and a towering chocolate fountain nearby, there's dipping, whipping, melting, and slicing to be done. The Canton ice cream chain, best known for its 31 flavors, is kicking its sweet treats up a notch and opening today the first Cafe 31, at Patriot Place in Foxborough.

Based loosely on the company's Baskin Cafes in Korea, the new concept is twice the size of an average ice cream shop, at 2,000 square feet, and filled with long purple couches, cushy pink seats, and stools. Stephanie Panek, the 25-year-old pastry chef and recent graduate of Johnson & Wales University, serves up way more than ice cream, offering chocolate fondue, cheesecake on a stick, caramel ginger apple crisp, and ice cream cake by the slice. Across from her pastry station is a 6-foot-long build-your-own sundae bar with a fresh whipped cream machine.

The Cafe 31 launch is the latest effort by executives at the country's second-largest frozen dessert chain to revitalize the brand. Over the past few years, Baskin, with 2,700 stores nationwide, has tested prototypes for new shops, renovated existing ones with interactive sundae stations, and signed on franchisees to build the first stand-alone shops in years.

A decade ago, executives decided the ice cream company wasn't a viable brand to stand on its own and began constructing stores that combined Baskin with sister chain Dunkin' Donuts. Dunkin' Brands Inc. of Canton owns both companies and saw Baskin as a way to fuel growth for its doughnut and coffee chain. A Dunkin' store can generate about $1 million annually, while a Baskin store brings in about $300,000 on average.

But that approach changed when Dunkin' Brands chief executive Jon Luther came on board in 2003 and realized the restaurants had to separate to succeed. The decision came as the ice cream industry began seeing significant growth and competition with the expansion of chains like Cold Stone Creamery, which offers an interactive experience with workers mixing toppings into fresh ice cream on a slab of frozen granite in front of customers. Between 2002 and 2007, Cold Stone grew its market share from 1.6 percent to 7.8 percent, with sales soaring from $88 million to $488 million, while Baskin slightly lost market share, from 9.7 to 9.5 percent in that span, according to market research firm Technomic Inc. Dairy Queen dominates the category with 40 percent of the market and $2.5 billion in sales.

"The mix-in concept of chains like MaggieMoo's and Cold Stone really changed the ice cream business, giving customers customization, interaction, and theater," said Dennis Lombardi, executive vice president of food service strategies at WD Partners in Ohio. "Baskin-Robbins is finally introducing theater to its brand. Baskin has needed to create more of an experience in the store, and by offering cake by the slice and sundae stations, it is attempting to leap frog the mix-in shops."

Cold Stone spokeswoman Anne Christenson said: "We're flattered that others recognize that these attributes enhance the ice cream experience; however, we feel it is a combination of our interactive and entertaining environment paired with our fresh, made-to-order creations that set us apart."

Baskin's Cafe 31 is also expected to make the store more profitable than an average Baskin shop with its expanded menu and premium prices ($11.99 for fondue; $6.99 for molten chocolate cake or cheesecake on a stick; $5.99 for ice cream bombe, a hard scooped ice cream surrounded by vanilla soft serve, dipped in chocolate, and airbrushed with colorful designs). Kimmel declined to provide details on profit expectations.

For the first time, Baskin will offer coffee, along with espresso, lattes, and cappuccinos using a special proprietary blend (not Dunkin's). After customers pay for their desserts, employees, wearing black buttoned-down shirts and beret-style hats, will bring the treats to the tables.

The shop's colorful wallpaper features cartoon murals of ice cream consumption and a huge "31" carved into the white ceiling that lights up at night. The shop attempts to be playful with a focus on trapezoids - the shape of menu boards, tables, and mirrors - along with slanted ceilings. It's hard to find a right angle, Kimmel boasts. The place can literally feel like a haunted fun house for sweet tooth fiends.

"We want this to be interactive and fun. We didn't want it to be stuffy," said Jimmy FitzGerald, Dunkin' Brands vice president of concept innovation.

He estimated the market could easily support hundreds of Cafe 31s in major cities across the country, and the company is currently in negotiations for new sites nationwide. Dunkin' selected Patriot Place, next to Gillette Stadium, as the first site because it's close to the brand's headquarters and it's a high-traffic location.

"This has the ability to be a real destination," FitzGerald said. "It's the highest expression of what a Baskin-Robbins could be."