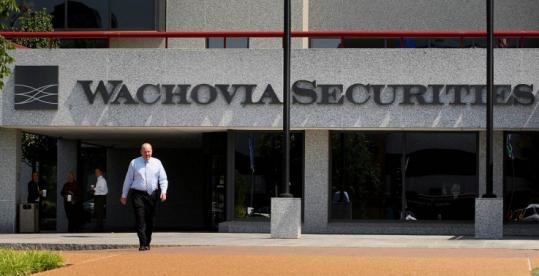 "Hundreds of Missouri investors have called my office because of inability to access their money," Carnahan said in a statement. She added she aims to take action to "to make these investors whole."

Wachovia spokeswoman Christy Phillips-Brown said, "Most securities firms, including Wachovia, are responding to inquiries from regulators. . . . The discussions that are occurring today are a part of this ongoing process."

Auction-rate securities had been seen by many as a safe investment. They were used, among other things, to fund municipal projects and agencies. They were promoted by brokers as liquid investments because customers could get out of them quickly.

The interest rates on such securities were reset at regular auctions, but the market fell apart during the credit crisis when investment banks stopped buying because the paper was seen as too risky. The market's failure left many issuers, including local governments, unable to fund projects or daily operations unless they borrowed at much higher rates. That left investors unable to access their cash.

Missouri's action, which also sought information on internal evaluations and marketing strategies, followed more than 70 formal complaints, representing more than $40 million of frozen investments. In April, the state division launched an investigation, requesting documents, e-mails, transcripts, and other records from Wachovia Securities and other banks.

Wachovia Securities has not fully complied with these requests, prompting the onsite inspection, Missouri officials said.