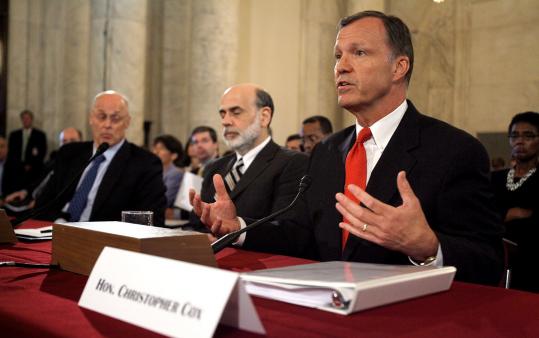 Meanwhile, Wall Street again fretted about problems in the nation's financial sector with a mostly down day in which the Dow Jones industrial average closed below 11,000 for the first time in two years - despite a steep pullback in oil prices.

Also yesterday the Bush adminstration stepped up its campaign to get lawmakers to swiftly pass legislation that would bolster troubled mortgage giants Fannie Mae and Freddie Mac.

The two federally chartered companies play a "central role" in the nation's housing system, President Bush said at a White House news conference. "The first step is to make sure there is confidence and stability in the mortgage markets," he said.

The president also acknowledged the struggles the economy is undergoing with record oil prices and turmoil in the housing market.

Oil prices did fall $6.44 a barrel yesterday, to $138.74 in trading on the New York Mercantile Exchange, as investors bet that the weakened economy in the United States and elsewhere will take its toll on global demand.

The Dow, meanwhile, fell 92.65, or 0.84 percent, to 10,962.54. It was the blue chips' lowest close since July 21, 2006; the high price of oil is one of the major reasons the Dow has been trading at nearly two-year lows. Shares of Fannie and Freddie - which together hold or back nearly half of the nation's $12 trillion in mortgages - tumbled again.

In his testimony, Bernanke sounded another warning about higher inflation. This problem looms even as officials try to cope with persistent strains in financial markets, rising unemployment, and housing problems.

Over the rest of this year, the economy will grow "appreciably below its trend rate" he said.

On the energy front, Bush yesterday also called on lawmakers to lift a moratorium on oil and gas drilling on the US outer continental shelf, a move that is being resisted by the Democratic majorities in the House and Senate.

On Sunday his administration asked Congress for authority to buy equity stakes in Fannie Mae and Freddie Mac and increase the government's credit lines to the companies.

The pledges of aid have raised concerns about the government's role in such financial problems and the risk to taxpayers.

Dodd said the rescue raises serious questions "about the nature of the economic crisis facing our nation, about the ability of these proposals to address this crisis effectively, and about the burden that the American taxpayer potentially is being asked to carry."