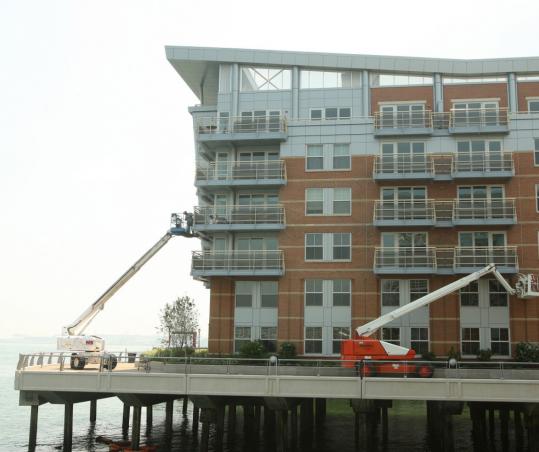 One of the world's premier hotel operators, Regent Hotels & Resorts, is abruptly out of the $300 million luxury Battery Wharf development on Boston's waterfront just before the hotel's scheduled opening this summer.

Regent's departure not only leaves Battery Wharf without a signature operator for its 150-room hotel, but the developers have also lost their provider of top-shelf concierge services to the buyers of the multi-million-dollar condominium units in the building. Without Regent, Battery Wharf may have trouble selling its remaining units, priced from $1 million to $4 million.

Jon Gollinger, chief executive of Accelerated Marketing Partners in Boston, which auctions new unsold condos around the country, said the hotel operator is a crucial part of the package of luxury amenities developers use to market high-end residential condo buildings. On its website, Battery Wharf described the lifestyle available for ultra-rich clients as "utopia engineered."

Without a well-known upscale hotel in the project, "it can create uncertainty" when buyers are asking "what kinds of services is the brand going to deliver me," Gollinger said.

Battery Wharf's difficulties are another sign of a slowdown in downtown Boston's high-end condo market. Previously that market had defied the national downturn in housing by continuing to quickly sell condos at higher and higher prices. In recent years, Boston has experienced a boom in the development of modern, luxury condo buildings that typically offer a level of service associated with fine hotels. These projects, including the elegant 45 Province near the old City Hall, the understated Belvedere near the Prudential Center, and the glass-encased Intercontinental Boston on the waterfront, have also introduced more modern, stylish architecture to the city's residential stock.

The Battery Wharf hotel will now not open until sometime this fall, the second time the opening has been delayed.

In a joint statement, Regent and Battery Wharf said they have "entered into discussions to terminate" their agreement, and blamed "philosophical differences on strategies for the project." Regent spokesman Thomas Polski, declined to comment further.

The condo owners, according to Battery Wharf, can expect to be pampered with 24-hour service that includes personal shopping and babysitting, catering, travel and entertainment arrangements, and dog-walking.

One owner of a Battery Wharf condo, who asked not to be identified by name because he did not want his address identified, said the hotel's completion was falling farther behind the condo building.

Regent operates high-end hotels that mix expensive designs and artwork with extensive personalized services to appeal to wealthy travelers and business people on expense accounts. The Boston hotel is to feature rooms with leather platform beds, bathrooms with marble and rain showers, and high-end audio systems and televisions. It has properties in Beijing, Shanghai, Bal Harbour, Fla., and the Turks and Caicos, and expects to open a new one in the Maldives.

In addition to the hotel, Battery Wharf has 105 condominiums, 22 of which have been sold, and 40 more are under agreement, according to a spokesman for the project.

While respectable, particularly in a slowing market, the pace of sales of Battery Wharf's units contrasts with that of another ultra-luxe condo and hotel project, the Mandarin Oriental in Back Bay. That project, on Boylston Street, has sold all of its luxury condos to wealthy buyers attracted to its location, the Mandarin's reputation and to the luxury stores that are part of the project, which is scheduled to open in October.

At Battery Wharf, an interim staff of about 40, some of whom had been employed by Regent, is providing concierge and other services to condo owners. But it does not have the kind of retail offerings planned at the Mandarin.

Hotel industry officials said that because of its premier waterfront location off Commercial Street in the North End, Battery Wharf should not have trouble finding a replacement for Regent.

"In the scheme of things, this isn't a blip on the screen," said Pat Moscaritolo, chief executive of the Greater Boston Convention & Visitors Bureau. Despite the slowing US economy, Moscaritolo said, the tourism business in Boston remains strong.

Longtime Boston hotelier Francois Nivaud, a consultant for Battery Wharf, yesterday said the developers are committed to finding a high-quality replacement for Regent. He also said the hotel delay would not affect the restaurants slated for the project. "The quality of an operator is one thing but more important is the commitment of the ownership to do what they're supposed to do," said Nivaud.

Debra Taylor Blair, president of Listing Information Network Inc., which tracks the downtown Boston condo market, said that prospective buyers are going to want to know what happens next at Battery before putting down millions for a condo.

"The hotel brand is closely tied to the condominium branding," she said. "Anyone looking at that project would want to know what Plan B is."

One of the project's major investors is the AFL-CIO Building Investment Trust, a pool of union pension-fund money that is managed by PNC Realty Investors. PNC Spokesman Pat McMahon said that the project's financial backing "is solid," despite the recent setback with the hotel. "The project is virtually complete," he said.