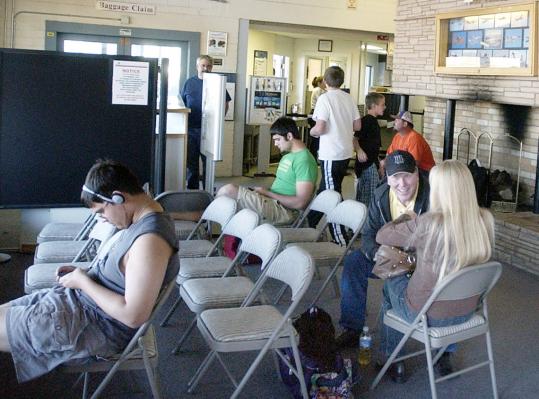 PRESCOTT, Ariz. - The rejection from Air Midwest came swiftly on a one-page fax. The carrier couldn't afford to fly to the mountain community of Prescott anymore, officials said. The city would simply have to find a new tenant for its tiny airport.

"Everything was going fine - then, bam - the airline is gone," Mayor Jack Wilson said with a sigh.

It's a frustration felt across rural America.

The federal government guaranteed numerous small towns and cities air service 30 years ago when it deregulated the industry. But skyrocketing fuel prices have outpaced subsidies from the Essential Air Service program, and many carriers are either trying to renegotiate their contracts or dropping out altogether.

According to the Department of Transportation, which administers the program, airlines have asked to opt out of subsidy contracts to 20 cities so far this year. That almost matches 2007's total of 24 cities. In 2006, airlines asked to drop contracts for 15 cities.

Meanwhile, the federal government plans to slash its Essential Air Service budget for 2009 to $50 million, less than half of its program budget in each of the last seven years.

Jim Corridore, an analyst at Standard & Poor's, said rural communities should get ready for even fewer flights in the future.

"This is not a charity," Corridore said. "Airlines are in a business to make money, and they're not. In fact, they're losing billions of dollars. So something needs to be cut."

The Regional Airline Association disagrees. Rural communities could keep their air service if the federal program was tweaked and given the funding it needs, said Faye Malarkey, a lobbyist for the association.

According to airline officials, the primary flaw with Essential Air Service is that it doesn't increase subsidies to meet rising operating costs like fuel.

So as jet fuel costs jumped, more than doubling from $1.86 per gallon at the beginning of 2007 to $3.96 per gallon in May, airlines were locked into the same subsidy. Some carriers raised fares, but that couldn't keep up with the cost of fuel.

"It's been years since we turned a net profit," Air Midwest president Greg Stephens said.

Stephens said Air Midwest tried to get out of its subsidized routes on the East Coast last year to save money, but the Department of Transportation forced it to honor some of those contracts for nearly 14 months because it couldn't find a substitute carrier to take over.

"We were trying to grow Air Midwest through EAS," he said. But "the customer is more than willing to hit the road" and drive to a major airport, despite high gas prices. Regional carrier Colgan Air Inc. also is struggling with its government-subsidized contracts. It posted an operating loss of $4.5 million in 2007, in part because of escalating fuel costs.

"In a lot of places we have EAS service, we're looking at fuel costs of $5 and $6 a gallon," said Joe Williams, a spokesman for Colgan parent Pinnacle Airlines Corp. of Memphis. "Nobody saw this coming two years ago."

The airline also is trying to turn a profit by moving some flights from Pittsburgh to Washington's Dulles International Airport and by offering travelers more connections through a code-share agreement with United Airlines.

Colgan recently asked to get out of contracts serving six cities in West Virginia, Massachusetts, and Pennsylvania, but it hopes to rebid for those contracts and ask for a greater subsidy to reflect the surge in fuel prices.

That's currently the only way an airline can adjust a subsidy contract for higher fuel costs - ask to get out of its obligation, wait 180 days as the department mulls the request, and then rebid for the contract, Malarkey said.

"It really is just about the worst thing you can do to the service," she said. "You've got the community up in arms. They don't quite understand. The airline seems to be abandoning them."

Carriers are asking Congress for a 44 percent boost in subsidies. The $70 million increase would stem losses and defections beyond the three carriers now dropping the program, according to the trade group for Pinnacle Airlines Corp., Great Lakes Aviation Ltd., and Northwest Airlines Corp.'s Mesaba Airlines.

Regional airlines are making their plea as Congress begins work later this month on a transportation-spending for the fiscal year starting Oct. 1. Their financial pinch is a microcosm of the pressures spurring UAL Corp.'s United Airlines and other big carriers to park jets and fire workers. Industry losses may reach $7.2 billion in 2008.

A Transportation Department spokesman said the agency agrees there's need for reform but is not in favor of creating flexible subsidies to reflect the rising cost of fuel. Its solution is to limit subsidies to only the most isolated communities.

The Essential Air Service program was created 30 years ago after the airline industry was deregulated. Carriers weren't going to fly unprofitable routes to tiny communities, so the federal government agreed to pay some of their costs.

Communities now consider them a lifeline. Subsidized flights encourage businesses to expand outside urban centers, and they give residents quick access to medical centers and international airline hubs in bigger cities.

Material from Bloomberg News was used in this report.