Comcast in, Tweeter out in Mansfield 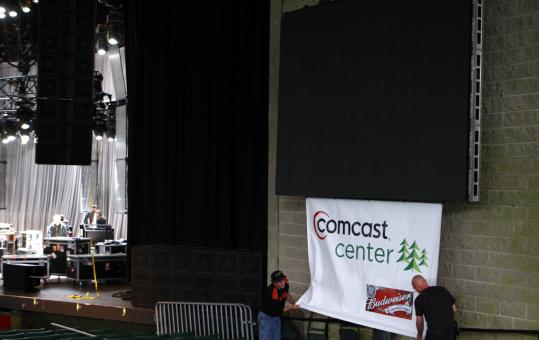 Eric Clapton may have played the blues last night, but probably not to mourn the demise of the Tweeter Center. The guitar legend headlined the first concert at the Mansfield amphitheater under its new name, Comcast Center.

Comcast Corp. yesterday said it reached an agreement with the venue's owner, Live Nation Inc., that gives the state's largest cable company naming rights for a decade. Financial terms of the deal were not disclosed.

"When this opportunity came up, we thought it was a good way for us to associate ourselves with a beloved local business," said Tom Coughlin, Comcast's regional vice president for Southeastern Massachusetts. "We saw this as a perfect match for us, because we are an entertainment company."

The center was known as the Great Woods Center for Performing Arts when it opened in 1986, and renamed the Tweeter Center in 1999. Last year, electronics retailer Tweeter Home Entertainment Group Inc. filed for Chapter 11 bankruptcy protection and terminated naming agreements with entertainment venues, including the Mansfield performance space, which has a capacity of 19,900 and hosts about 35 events a year.

Every time someone passes the venue, buys a ticket, or sees an advertisement for an event, they are exposed to the company. And for people who attend events such as the Clapton concert, "the name is literally surrounding them," Brickley said.

"They are walking into that branded name. It has such an exponential reach that it's almost unquantifiable."