THIS STORY HAS BEEN FORMATTED FOR EASY PRINTING
Odd Jobs

From A to Z, font designer knows his type 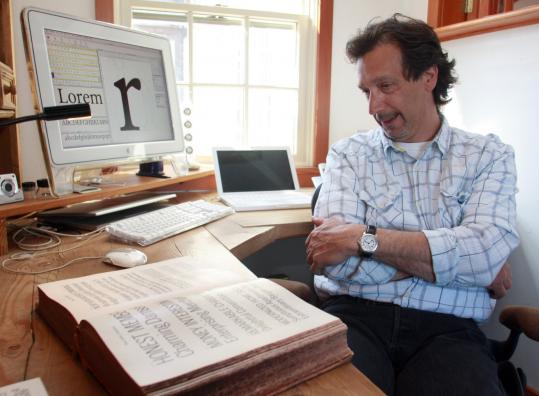 David Berlow says creating a font is virtually trying to solve a problem with words. Sometimes it's a single word like a logo; other times, it's for a Christmas edition, or the 30th anniversary of the Brooklyn Bridge, he says. (VINCENT DEWITT FOR THE BOSTON GLOBE)
Email|Print|Single Page| Text size – + By Cindy Atoji Keene Globe Correspondent / May 25, 2008

Unless you're in the design or publishing industry, David Berlow won't bother explaining his line of work to you.

"Trying to explain that I'm a font designer to people who don't know what a font is can get too complicated," says Berlow.

A font is how type looks on a page or screen; for example, right now you're reading this article in a newspaper typeface, or font, that's a certain size and style. And this particular font happens to be custom designed by Berlow's company, the Font Bureau Inc., which was involved in The Boston Globe's redesign in 2000.

Berlow has been involved with creating typographic identities even before the current rage with fonts began. Sure, now even Barack Obama, Beyonce, and Kate Moss have their own fonts, but Berlow, who started his company in 1989, remembers the predigital days when fonts were made by drawing letters on paper.

Have you seen Obama's font? What do you think?
I don't have an opinion about the font itself, but how well it works. As far as Obama's font, I think it's rather impersonal, geometric, and somewhat cold, although it's one of the more lively san serifs that you would find. But he wanted something that is not often used.

And what would Hillary's font look like?
I'm not in that argument. Other people have argued that to death.

So you developed a font for Playboy magazine. Was it beige and well-endowed?
Playboy magazine came to me; they were printing with two printing processes, offset and gravure. Gravure (printing directly from cylinder to paper), gives a richer, smoother texture when printing flesh tones and makes the type look darker on the page than offset (indirect image transfer from plates). So if you want the type to look the same, you have to use two fonts. We developed two fonts for Playboy, but they kept complaining that the type was still coming out too dark or too light. Finally, I got a note attached to a proof that said, "Sorry. It was me. I needed new glasses. Thanks for all your help. Hef." That was Hugh Hefner, of course.

How do you create a font?
People say you fiddle with drawing, and you end up with a typeface, but it's virtually trying to solve a problem with words. Sometimes it's a single word like a logo; other times, it's for a Christmas edition, or the 30th anniversary of the Brooklyn Bridge. People need a different tone of voice for whatever they are trying to do. The New York Times uses 70 typefaces to look like it does. I haven't counted the Globe. It uses maybe 50-100 fonts.

What do the offices of the Font Bureau look like?
From Oakland, Calif., to Delft, Holland, all the designers work from home. I have never been to the office. The first time I saw it was when I watched the documentary "Helvetica," which showed our offices.

When you make a font, do you start with the letter "A"?
You sit down with the idea for a long time and figure out what the client is trying to express. Then you go to the computer and draw some characters, like R,S,T,A, and E, which are more commonly used than others. Maybe it's too sweet, rough, bold, or heavy - you shape it until they say they like it. Then comes the complicated process of deploying all of the 200-300 characters, and 30-40 styles, every weight from thin to extra black. You create a complete typographical hierarchy.

Where does your inspiration come from?
I can be inspired by a specimen book from 1536. I'll dig into it with a magnifying glass and see what the contours would have been. So that's the shape, what are the other 289 characters going to look like? It's putting together little molecules to form a reading experience.

We'll be seeing a lot more of Calibri, as it's the Microsoft Office 2007 default font. What do you think of it?
Microsoft bundles about 400 fonts with every operating system. And when they choose one of those to become the default, it's because it's the least obtrusive. They're trying to use something that no one recognizes. What do I think of Calibri? If people don't like it, they'll change it.