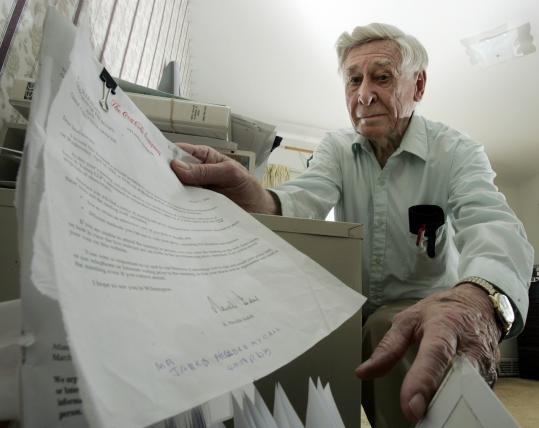 MORRESTOWN, N.J. - Some of Robert Morse's ideas are small: Paint a baseball so it's easier to read a curve. Make a four-colored deck of cards so his wife doesn't confuse the spades and clubs.

Some are bigger: Cap the pay of American corporate executives at $500,000 a year.

The 92-year-old inventor, poet, and shareholder activist considers such a level of compensation "far above that needed to enjoy an elegant lifestyle," according to his proposal at Merck's annual meeting last month.

"How many planes can you fly on? How many pairs of shoes can you wear?" asks the retired jeweler, who keeps a model of a gadfly in his home office. There he tracks and trades stocks online, managing his retirement money while maintaining enough stock to submit shareholder proposals at dozens of corporations.

Part nest egg and part soapbox, those shares have given Morse the right to put his proposal before investors at Merck & Co., Ford Motor Co., Coca-Cola Co., Exxon Mobil Corp., and others over the last decade. He hasn't won one yet - but he's not giving up.

Morse's plan won just 4 percent of shareholder votes at Merck - a standard reception for his proposals - but a network of like-minded investors is having more success with a gentler request: Give shareholders an advisory vote on executive pay.

Analysts say the economic slowdown and new standards of disclosure for executive compensation have contributed to the sudden popularity of the "say-on-pay" advisory vote since 2006, when only half a dozen companies considered the measure.

Paul Hodgson of The Corporate Library, an independent governance research firm, said the state of the economy has made many investors anxious about the escalating pay for top executives.

Meanwhile, new regulations require publicly traded companies to more fully disclose the value of stock options and benefits in total compensation packages, giving investors a clearer picture of just exactly how much CEOs are raking in.

"Five years ago the markets were doing great and now they're not. But CEO pay has kept going up," Hodgson said.

About one-quarter of the nearly 100 companies facing "say-on-pay" proposals this season have already held votes, and the plans average more than 40 percent investor support, according to RiskMetrics Group, which tracks trends in corporate governance.