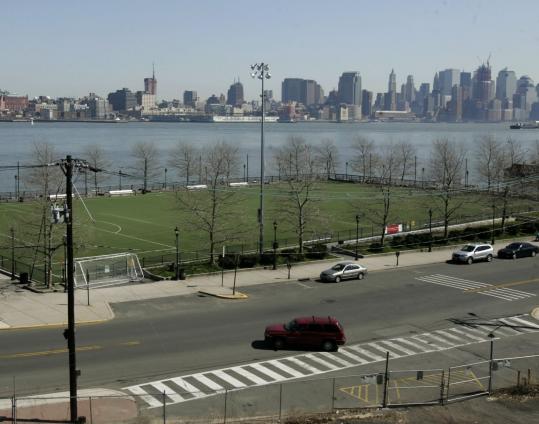 Frank Sinatra Park in Hoboken was voluntarily closed when New Jersey health officials found up to 10 times the amount of lead that is allowed in soil on any contaminated sites that are being turned into homes. (Mike Derer/Associated Press)
Email|Print|Single Page| Text size – + By Associated Press / April 19, 2008

TRENTON, N.J. - The Consumer Product Safety Commission is looking into possible health hazards from lead in artificial turf installed at schools, parks, and stadiums across the country.

Two fields in New Jersey were closed this week after state health officials detected what they said were unexpectedly high levels of lead in the synthetic turf that raised fears athletes could swallow or inhale fibers or dust from the playing surface.

The artificial-turf industry denied its products are dangerous. But the CPSC said it is investigating.

"We have a great deal of interest into any consumer product that could be used by children where children could potentially be in harm's way because of lead exposure," CPSC spokesman Scott Wolfson said.

The United States has about 3,500 synthetic playing fields made of various materials, including nylon and polyethylene, and about 800 are installed each year at schools, colleges, parks, and stadiums, according to the Synthetic Turf Council. Artificial turf was once a luxury reserved for professional sports teams, but its use has exploded in recent years as a way to save costs and reduce water use.

Pigment containing lead chromate is used in some surfaces to make the grass green and hold its color in sunlight. But it is not clear how widely the compound is used. The New Jersey Health Department found lead in both of the nylon fields it tested, but in none of the 10 polyethylene surfaces it examined.

New Jersey found itself at the forefront of the issue after state health authorities stumbled onto the lead while investigating whether run-off from a scrap-metal operation in Newark had contaminated a playing field.

New Jersey's epidemiologist, Dr. Eddy Bresnitz, said fibers and dust created through wear and weathering might become airborne, where they could be inhaled or swallowed.

But Rick Doyle, president of the Synthetic Turf Council, said the lead is fixed in place in the nylon and does not leach out, and thus poses no health risk. He also said that in recent years, manufacturers have begun offering lead-free nylon surfaces.

"In the 40 years that synthetic sports turf has been in use in the United States and around the world, not one person has ever reported any ill effects related to the material composition of the fibers," he said.

Bresnitz has ordered additional tests on how easily fibers and particles from artificial turf can be swallowed or inhaled. He said the risk from playing on a lead-impregnated field is probably very low. Nonetheless, he suggested washing thoroughly after play, laundering clothes separately, and wetting down fields to keep the dust and fibers down during play.

Two fields in New Jersey - Frank Sinatra Park in Hoboken and a playing surface at the College of New Jersey in Ewing - were voluntarily closed after state health officials found up to 10 times the amount of lead that is allowed in soil on any contaminated sites that are being turned into homes. The government has no standard for how much lead is allowable in artificial turf.

A city-owned field in Newark was closed last fall after similar test results; officials there are replacing the surface.

Lead can cause brain damage and other illnesses, particularly in children.