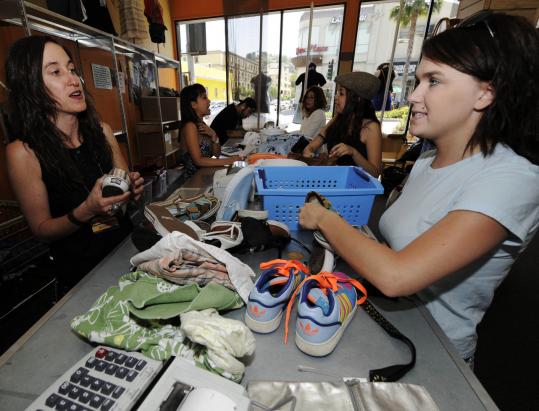 NEW YORK - The souring job market and rising costs of the usual teenage indulgences - a slice of pizza, a drive to the mall, the hottest new jeans - are causing teens to do something they rarely do: be thrifty.

It's a far cry from the freewheeling spending of recent years, when teens splurged on $100 Coach wristlet handbags, $60 Juicy Couture T-shirts, and $80 skinny jeans from Abercrombie & Fitch.

Now jobs for teens are less plentiful, and parents who supply allowances are feeling the economic pinch.

Stalwart retailers of teen apparel, such as Abercrombie and American Eagle Outfitters Inc., are reporting sluggish sales, defying the myth that teen spending is recession-proof.

It's even becoming cool to be frugal.

Last week, Ellegirl.com, the teen offshoot of Elle magazine, launched a video fixture called Self-Made Girl, which shows teens how to make clothes and accessories. The first video offers tips on how to create a prom clutch.

"It's a little tacky in the economic unrest to tote a big logo bag," said Holly Siegel, the site's senior editor. She said it's no longer about teens "one-upping each other," but rather where they can get it cheap.

Victoria Bradley, 16, from Springfield, Mo., says the $80 she earns each month from baby-sitting is being eaten up by more expensive school lunches, late-night snacks with friends, and stylish clothes.

"I used to be able to buy a T-shirt and jeans every couple of months," Victoria said, adding some of her friends are even "making their own clothes or altering their old ones to fit or look better."

The job market for teens isn't what it used to be, either: Nathan Reeser, 15, of Cincinnati, lost his job making pizza and has had to cut back on spending. He's shopping more at Target and less at Abercrombie & Fitch's Hollister stores.

Teen hiring has slumped 5 percent since March 2007, with many mom-and-pop stores, which typically hire younger workers, laying off employees. Hiring in the overall job market fell just 0.1 percent during the period.

Last month, teen retailers suffered an 8 percent drop in sales at established stores. The good news is that the under-20 crew is still spending on tech gadgets like iPods, cellphones, and headsets, analysts say.

Sales at teen retailers open at least a year averaged a 0.5 percent decline last year, compared to a 3.3 percent increase in 2006 and a 12.1 percent gain in 2005, according to UBS-International Council of Shopping Centers.

Among the few bright spots is Aeropostale Inc., whose jeans are about 30 percent cheaper than Abercrombie & Fitch. Urban Outfitters Inc., which operates its namesake stores and the Anthropologie brand, has held up well. Trend experts believe that's because it has a thrift-store feel.

Secondhand clothing chains have seen business surge this year as teens buy popular brands like Gap, Banana Republic, and Juicy Couture at a fraction of the regular price.

Kerstin Block, president and cofounder of Buffalo Exchange, a Tucson-based chain that sells second-hand clothing, said Gap jeans there run $9 to $20. A new pair runs $50 to $60. Block noted that buying second-hand is also appealing to a growing eco-friendly sentiment among teenagers.