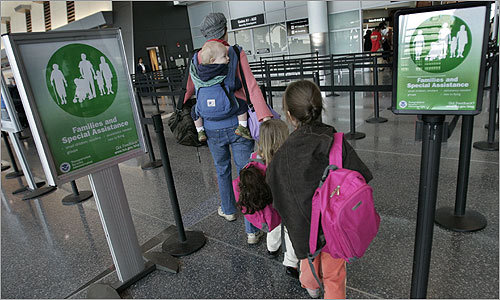 Attention air travelers: Prepare to get into the driver's seat. Reaching the security checkpoint at Logan International Airport's Terminal A is now like navigating the highway.

Passengers who want to take their time can use the slow lane (which the Transportation Security Administration calls the "families and special assistance" lane). Seasoned travelers can scoot to the fast lane (the "expert" lane, actually). The rest ("casual" travelers, the TSA calls them) can cruise through the middle lane.

The TSA introduced "self-select lanes" at Logan's Terminal A yesterday and plans to roll them out to 12 airports by the end of March. The program speaks to how stressful the air experience has become since the Sept. 11 terrorists' attacks - for both passengers and security screeners. Giving a bit of control back to travelers might ease the tension and speed up the screening process, too.

"The basic intent of this is to provide a calming experience for every traveler," said George Naccara, the TSA federal security director overseeing Logan. At the same time, it could soothe frazzled security screeners, who will be "more mentally prepared" to recognize X-rayed objects as toys in the family line or computer accessories in the expert line, Naccara added. "This is a very trying job. You're invading people's private space all day long."

The 7,000 Delta Air Lines Inc. and Continental Airlines passengers who enter Terminal A each day can ignore lane guidelines, which are marked by signs with a green circle for the family/special needs lane, a blue square for the casual lane, and a black diamond for the expert lane. Although there are big signs near the check-in kiosks and security checkpoint entrances explaining which lane to stand in, the parsing process is voluntary, said TSA and the Massachusetts Port Authority, which runs Logan.

That wasn't the case for a disgruntled passenger from Sarasota, Fla., yesterday afternoon, when about 10 additional airport, TSA, and airline staffers were on hand to introduce the new system. One woman began pushing her Shih Tzu dog named Cassidy in a stroller through the empty "casual traveler" lane, then decided to change to the "special assistance" lane, which also was empty but designated for passengers with strollers. A TSA screener wouldn't let her switch.

"Isn't that dumb?" grumbled the pet owner, who wouldn't give her name. "This is stupid."

Haley DiMarino, of Brattleboro, Vt., found the divisions helpful. In the family lane, 3-year-old Madison DiMarino struggled to lift her fuchsia backpack bulging with a doll onto the tall X-ray conveyor belt while her mother grappled with two tote bags and unstrapped 1-year-old Alex from her back harness. Seven-year-old Linaea looked on, unhurried.

"Since I'm traveling with kids, when you get to this point, you have to take off four pairs of shoes," said DiMarino. "If you aren't in a lane with other people with kids, they roll their eyes."

Over in the expert lane, Jonathan Ashe of Los Angeles, used both hands to untie both shoes at once. That was after he cut in front of a man who took a few seconds too long to unload his belongings into the X-ray bins. "If you snooze, you lose in the airport game," said Ashe, a marketing-services professional who travels at least four times a month and calls the self-select process "absolutely brilliant."

The TSA said monthlong trial runs at the Denver and Salt Lake City airports resulted in increased customer satisfaction and faster screening of all groups of passengers, although it did not have data to support those claims. But on the "Evolution of Security" blog on the TSA's website, some travelers have posted comments arguing that categorizing travelers doesn't solve the real problem of poorly trained or unmotivated screeners who slow down the system.

Naccara disagreed with that assessment, calling it "an unfair generalization." He added that many factors stall the screening process, including inadequate space for the TSA-approved checkpoint layouts at older airports and travelers leaving banned items in their pockets, carry-ons, purses, or briefcases.

The self-select lanes are being unveiled in the Orlando, Fla., and Spokane, Wash., airports this week and at several yet-to-be-disclosed airports next week. And Massport may expand the procedure to other checkpoints, such as ones in Terminal E, said Edward C. Freni, Logan's director of aviation.

Whittling down wait times has become a daily discussion for Logan officials, and the morning meetings about it have paid off. For the past year, Logan has held the monthly record for the shortest or second shortest average wait time per passenger out of the country's 26 largest airports, according to the TSA.

Still, some behavioral psychology experts question whether this new honor system will make a difference.

"If you're on a highway and there's a traffic jam, everyone merges into the lane that looks like it's going the fastest, and then when everyone merges, it goes the slowest," said Tamara Feldman, a Cambridge psychologist. "That's what I imagine happening."