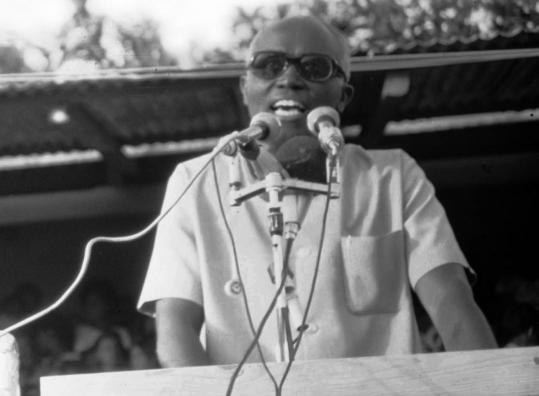 João Silva, head of protocol at the Cape Verde embassy in Lisbon, said Mr. Pereira died at Portugal’s Coimbra University Hospital where he had been since August.

Silva did not know the cause of death, and the hospital declined to provide details.

Mr. Pereira was a guerrilla fighter against the Portuguese colonial administration and became head of state after Cape Verde won independence in 1975, ruling until 1991 when he lost the country’s first democratic elections.

Mr. Pereira was a cofounder of the African Party for the Independence of Guinea and Cape Verde, or PAIGC, in 1956. It opposed the Portuguese, and Pereira was one of its most influential members.

PAIGC operated in secret in Guinea-Bissau, on Africa’s west coast, and in Cape Verde - an Atlantic archipelago of 10 volcanic islands and eight islets 360 miles off the coast.

Mr. Pereira said he was a reluctant activist but was inspired to take up arms by the unjustness of rule from Europe which made local people second-class citizens.

“I always say I was involved in politics without being a politician,’’ he said in a 2002 interview with Portuguese paper Publico. “What led me into politics was the humiliation and exploitation of the Cape Verdean people and the injustices of the colonial system.’’

“Leader of a generation and first president of the young Cape Verdean nation, [Mr. Pereira] was a man of deep convictions whose overriding concern was the people’s social and economic progress,’’ Cavaco Silva said in a statement on his website.

Cape Verde was one of Portugal’s five African colonies. After 1975 independence, PAIGC ruled the country as a Marxist one-party state, with most people living from subsistence agriculture. Economic decline and lengthy droughts worsened by overgrazing and deforestation brought a wave of emigration, especially to the United States and Europe.