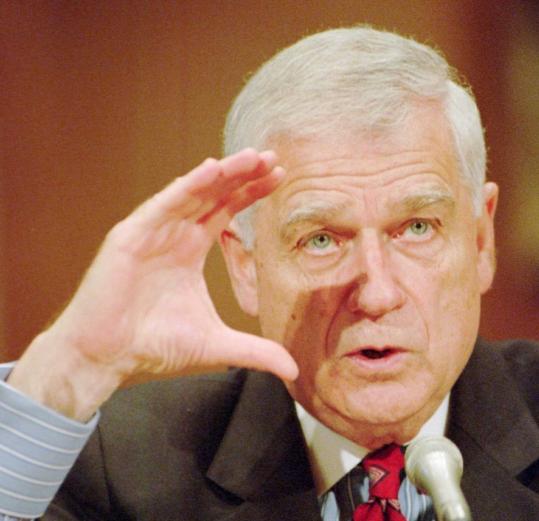 Mark Hatfield, a Republican, was known for his ability to work both sides of the partisan aisle. (Associated Press/ File 1995)
By Terrence Petty Associated Press / August 8, 2011

PORTLAND, Ore. - Former senator Mark Hatfield, an outspoken critic of war whose liberal views often put him at odds with fellow Republicans, died yesterday. He was 89.

Mr. Hatfield, who had become increasingly frail in recent years, died at a Portland residence, said Gerry Frank, a longtime friend. The former senator’s death was first reported by The Oregonian newspaper.

He was the longest-serving US senator in Oregon history, serving five terms from 1967 to 1997. He gained fame for key efforts against American involvement in Vietnam and the Persian Gulf war, but also spoke in favor of President Bush’s decision to invade Iraq.

One of the first American servicemen to enter Hiroshima following the atomic bombing, he once said one of his major accomplishments was helping usher through Congress a ban on nuclear weapons testing in 1987.

“Every president other than Eisenhower has been seduced by the military concept that that is our sole measurement of our national security and the more bombs we build, the more secure we are,’’ Mr. Hatfield said a decade later.

As chairman and later ranking Republican on the Senate Appropriations Committee, Mr. Hatfield steered millions of dollars to public works projects in his home state. They ranged from national scenic areas and hydropower dams to the state university system and the Marine Science Center that bears his name in Newport, Ore.

“You can’t travel anywhere in Oregon without seeing the difference Mark Hatfield has made,’’ former Oregon secretary of state Norma Paulus once said.

Mr. Hatfield was known to vote across party lines. In 1995, he was the only Republican to oppose a balanced budget amendment, which left it just one vote short of passing the Senate.

He also criticized the death penalty and opposed abortion, though he never actively sought to place legal limits on abortion. He said his views on both issues were based on his belief in the sanctity of life.

A devout Baptist, he frequently spoke out for the sick, the homeless, and others in need of an advocate.

In a hushed congressional hearing room in 1990, he pleaded for increased money for Alzheimer’s research while describing how the disease had reduced his father, a powerfully built former blacksmith, to a “vegetable.’’

In an effort to make his point about the death penalty in a 1991 Senate floor speech, he proposed public executions to show the “barbaric’’ nature of the government-sanctioned killings.

As he prepared to retire in late 1996, Mr. Hatfield said in an interview that he was leaving a Congress that is more partisan and less collegial, and admitted he was frustrated with hard-line GOP conservatives who pressed for his ouster as Appropriations Committee chairman.

“I’m going to miss the people, but not the process,’’ he said. “Today, unlike the past, politics and campaigning has become a year-round experience. They still are in campaign mode after the election.’’

Political solutions, he said, “are found not on the left wing or the right wing, but in the center.’’

His popular appeal in Oregon and distinction for integrity earned him the nickname “St. Mark,’’ although the reputation was tarnished by a pair of ethics investigations in the 1980s and ‘90s.

He was elected governor of Oregon in 1958 and reelected in 1962 before winning his first US Senate campaign in 1966. Earlier, he was Oregon’s secretary of state and served in the state Legislature.

At the 1965 National Governors’ Conference in Los Angeles, he was denounced as a traitor for casting the lone “no’’ vote on a resolution supporting President Johnson’s policy in Vietnam.

In the early 1970s, he joined Democratic Senator George McGovern of South Dakota to sponsor an amendment seeking to end the Vietnam War.

A decade later, he helped launch a campaign for a nuclear weapons freeze and led a Senate filibuster that sank President Reagan’s push for a line-item veto.

Mr. Hatfield was one of only two Republican senators who voted against US military force against Iraq in January 1991.

However, Mr. Hatfield said in a 2002 interview that he could back a war against Iraq. He said he was convinced that Iraqi leader Saddam Hussein had weapons of mass destruction and that Iraq already was part of the nation’s war on terrorism, started by the Sept. 11, 2001, attacks.

“I start from the premise that we’re already in a war,’’ he said.

He said his experiences as a Navy officer in World War II helped shape his views. He served on a landing craft during the invasion of Iwo Jima in 1945 and then become one of the first Americans to see the devastation in Hiroshima later that year.

He and several of his shipmates had been instructed to chronicle what was left of the Japanese city a few weeks after the atom bomb was dropped there.

“It was utterly indiscriminate destruction that you could see in every direction you looked,’’ he said. “You could feel, you could smell because all of the bodies had not been extricated yet. Obviously it was a very emotional experience.’’

In 1984, it was disclosed that Basil Tsakos, a Greek financier, paid $55,000 in real estate fees to Mr. Hatfield’s wife while he was promoting Tsakos’ trans-Africa pipeline proposal. The senator denied wrongdoing.

In 1992, he was reprimanded by the Senate Ethics Committee for failure to report thousands of dollars worth of gifts from James Holderman, former president of the University of South Carolina.

The senator said the reporting failure was inadvertent.

Born in Dallas, Ore., Mark O. Hatfield taught political science and was dean of students at Willamette University. He served in the Oregon House from 1951 to 1955, and then was in the Oregon Senate from 1955 to 1957. He was Oregon’s secretary of state from 1957 until his inauguration as governor in early 1959.

He was author or coauthor of several books, including “Against the Grain: Reflections of a Rebel Republican.’’

Mr. Hatfield and his wife, Antoinette, had four children.