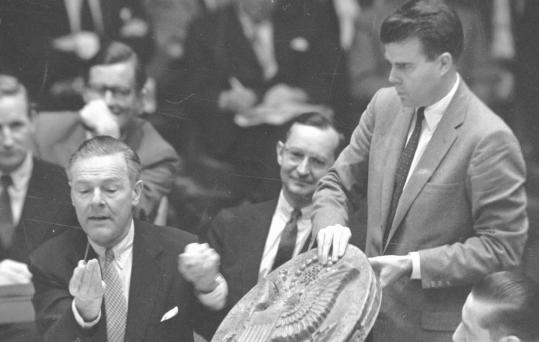 In 1960, Henry Cabot Lodge Jr. (left) and Mr. Pedersen presented evidence at the United Nations of a listening device they said was planted for spying by Soviet agents in a hollow US seal at the US ambassador’s office in Moscow. (Associated Press)
By Daniel E. Slotnik New York Times / August 2, 2011

NEW YORK - Richard F. Pedersen, a US diplomat who left a career imbued with Cold War politics to become president of the American University in Cairo, died on July 11 at his home in Greenport, on New York’s Long Island. He was 86.

Mr. Pedersen’s government career of more than 20 years encompassed posts at the United Nations and the State Department and in Hungary, where he was the US ambassador. At the United Nations, starting in 1953, he worked under five US ambassadors, including Henry Cabot Lodge Jr. in the Eisenhower administration and Adlai E. Stevenson under President Kennedy, assisting Stevenson in tense negotiations during the Cuban missile crisis in 1962.

A memorable episode in his UN career came in 1960. A hollow US seal that had hung for years in the US ambassador’s office in Moscow was found to contain a hidden microphone, planted by Soviet agents for spying. After the seal was carried to the floor of the Security Council, Mr. Pedersen and Lodge made a well-publicized show of presenting it as evidence to justify the incursion of American spy planes into Soviet airspace, which had provoked angry Soviet protests.

Mr. Pedersen left the United Nations in 1969 after attaining the rank of deputy US representative to become counselor to the State Department, advising Secretary of State William P. Rogers during the Nixon administration. In 1970, the Nixon White House tapped his phone in its effort to trace leaks about the invasion of Cambodia.

Three years later, President Nixon named Mr. Pedersen ambassador to Hungary, a post he held until 1975. He became president of the American University in Cairo in 1977. Over 13 years, he expanded the university from a small liberal-arts college to a much larger institution. He started a fund-raising campaign that supported the growth while increasing its endowment. It now enrolls about 5,000 students.