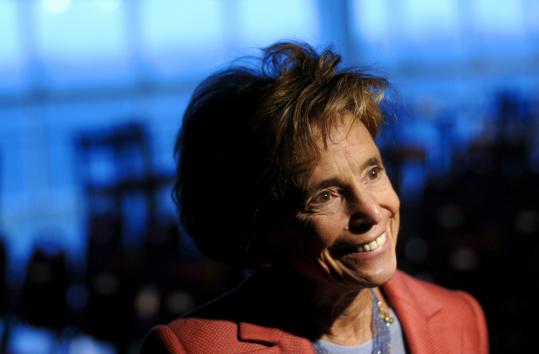 Myra Hiatt Kraft, who surrendered much of her privacy as a daughter and a spouse in families led by powerful men, then turned that sacrifice into a philanthropic tool for public good, died in her Brookline home of cancer yesterday. She was 68.

Reluctantly famous, Mrs. Kraft found a beneficent use for the recognition that came with being married to Robert Kraft, owner of the football team, as they took their place among Boston’s most influential and generous couples.

“You call someone, they get right back to you,’’ she told the Globe in 1997. “Even if they think you’re calling for money.’’

Often she was. Never simply a boardroom benefactor, she staffed phone banks for fund-raising drives and made persuasive calls when a cause needed the financial boost only the rich can provide. The charities she helped included Jewish organizations worldwide, medical causes, and youth groups.

Governor Deval Patrick described Mrs. Kraft as “a pillar of our community and a beloved friend,’’ and said he and his wife, Diane, “will miss her warmth, wit, and wisdom.’’

In a statement, the Patriots organization said: “Words cannot express the deep sorrow that we feel in learning of the passing of Myra Hiatt Kraft. . . . We are all heartbroken. The global philanthropic community and the New England Patriots family have suffered a great loss.’’

With a hands-on approach, Mrs. Kraft helped redefine the philanthropist’s role. Prone to asking piercing questions, she chaired the boards of Combined Jewish Philanthropies of Greater Boston and the Boys & Girls Clubs of Boston, which so valued her vision and drive that it waived term limits to keep her at the helm from 1996 to 2002.

“With her great heart and magnificent spirit, Myra lived her life in service to those who needed her help,’’ said Barry Shrage, president of CJP. “Her personal acts of loving kindness were an essential part of who she was. . . . No one in need was ever turned away.’’

Other boards on which she served included those for her alma mater, Brandeis University, and for The Boston Foundation, the United Way of Massachusetts Bay and Merrimack Valley, Brigham and Women’s Hospital, the American Repertory Theater, the American Jewish Joint Distribution Committee, and Facing History and Ourselves, a Holocaust education organization.

In their last major gift as a couple, the Krafts gave Partners HealthCare $20 million this year to draw doctors to community health centers by paying off part of their student loans and setting up fellowships in exchange for them working at centers that serve the needy. “Myra had a thoughtful, quiet, consistent leadership style that was endlessly generous,’’ said Dr. Gary L. Gottlieb, president and chief executive of Partners, adding that “you’ll never find a kinder, warmer, menschier person than her. As diminutive as her physical size was, it was in inverse proportion to the size of her heart and soul.’’

So involved was Mrs. Kraft in philanthropy that perhaps her biggest worry when her husband bought the Patriots in 1994 was that the large sums of money spent and borrowed would curtail their giving. He assured her they wouldn’t, she told the Globe in 2007. Instead, their philanthropy increased along with the burgeoning financial resources of a successful franchise. As of March, Forbes magazine estimated the family’s net worth at $1.5 billion.

Along with several simultaneous memberships on boards, Mrs. Kraft had managed the Robert and Myra Kraft Family Foundation and the New England Patriots Charitable Foundation. The former contributed to Jewish groups and to medical, educational, and arts organizations; the latter sent money to youth sports organizations, Catholic schools, and programs for at-risk children. Choosing recipients, she said, was simple.

“I’m not looking for earth-shattering ideas,’’ Mrs. Kraft told the Globe in 2007, “but good programs that you know whatever you give them is going to be used well, and that it’s needed.’’

“I hope the Kraft family can find comfort knowing that their support of Dana-Farber has benefited cancer patients worldwide and that it stands as a fitting testament to Myra and her commitment to help others,’’ said Dr. Edward J. Benz Jr., Dana-Farber’s president.

Causes involving her Jewish heritage were among Mrs. Kraft’s priorities, and she traveled to Israel a few times a year.

“The State of Israel has lost a great friend and a tireless advocate in Myra Kraft,’’ said Shai Bazak, consul general of Israel to New England. “Her light, generosity, compassion, and dedication will be missed by countless Israelis.’’

Mrs. Kraft inherited her passion for philanthropy early from her father, Jacob Hiatt, who escaped the Holocaust by emigrating from Lithuania in the mid-1930s. His parents, sisters, and brother perished in concentration camps.

The wealthy owner of a packaging company, Hiatt was one of Worcester’s greatest patrons of education, the arts, and religious causes, and Mrs. Kraft emulated him in 1948 when she made her first foray into charitable work. She was 5 when her father visited European camps for those displaced by World War II, then traveled to Palestine, which was on the cusp of becoming Israel. While he was away, she wanted to help at home.

“One morning I got up, took a bag, and decided to go out to the neighborhood to raise money for the poor children in Europe and Palestine,’’ she told the Jerusalem Post in 2008. “I went door to door. My mother was getting frantic because I was late and she had no idea where I was. I came in dragging this sack of money.’’

By the time Mrs. Kraft was an adult, she measured contributions in the millions. Since marrying in 1963, the Krafts have given away more than $100 million to organizations involved in everything from changing lives in Israel to helping those hobbled by urban blight in Boston and Worcester.

She grew up in parts of Worcester that were economically distant from residents she later helped through philanthropy. She graduated in 1960 from the Bancroft School, an independent K-12 day school, where during her senior year she wrote and directed “North Atlantic,’’ poking fun at the musical “South Pacific.’’

At Brandeis, she was a history major when she dined with friends one evening in 1962 at Ken’s delicatessen in Copley Square. Robert Kraft walked in with friends after a Columbia-Harvard basketball game.

He drove to Brandeis to find her. At first, she declined a request for a date because she had plans with her boyfriend, but “we wound up going out, and she proposed that night,’’ he said.

The Krafts married in June 1963, and the first of their four sons was born before she graduated a year later. “Myra was a true Brandeisian,’’ said Brandeis president Frederick M. Lawrence, “She was always reaching out to students, faculty, and other trustees and served as a model to all of us in so many ways.’’

Cardinal Sean O’Malley of the Boston Archdiocese said Mrs. Kraft was “a strong advocate for serving the less fortunate and, together with her husband Robert, they have been great supporters of worthy organizations like Catholic Charities. Her dedication and commitment to serving those in need and her willingness to enlist others in that important work will be greatly missed.’’

The Krafts have lived for years on an estate in the Chestnut Hill section of Brookline. The family also owns properties on Popponesset Island in Mashpee. Elton John provided the entertainment for the couple’s 40th anniversary party in Gillette Stadium in 2003, serenading them with “Moon River’’ as their wedding photo filled giant TV screens. “I realize that it’s a privilege,’’ Mrs. Kraft said, in the 2007 interview, about the perks of wealth and her extensive charity work. “And I don’t want to abuse the privilege.’’

Mrs. Kraft also leaves a sister, Janice Hiatt of Pembroke, and eight grandchildren. A memorial service will be held at 10 a.m. tomorrow in Temple Emanuel in Newton.

Football, not surprisingly, was of more interest to Mrs. Kraft’s husband and sons when the family purchased the Patriots. She gradually asked questions about the game “and every year my knowledge increased,’’ she told the Jerusalem Post in 2008. “Now I absolutely love it.’’

Ultimately, though, Mrs. Kraft believed that, with the exception of family, she was defined by the uncounted hours she worked with charities. “It’s easy to write a check,’’ she told the Globe in 2007. “But this is what I look at as what my occupation is. I don’t know how to play bridge, nor do I want to learn how to play bridge. This is what I do.’’

A look at Myra Kraft