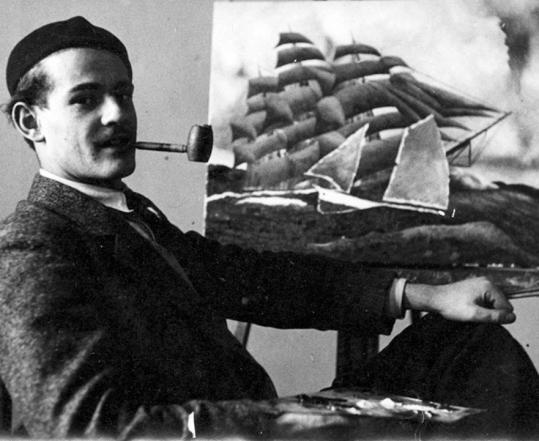 History has a way of focusing on particular moments in a life, and for T. Lux Feininger, that meant the photographs he took as a teenage student at Bauhaus in Germany in the 1920s have constantly competed for attention with the paintings he created for some 80 years.

Despite his talents as a photographer, he set aside his camera decades ago. Drawn to the easel, he conjured visions that evolved through several styles in his lifetime.

“Next to the love of materials and the development of the painter’s craft,’’ he wrote in a statement that accompanied a 1973 exhibition, “I find the chief appeal in painting to lie in the possibilities of balancing elements of design and of magic.’’

Mr. Feininger, who kept painting until a couple of years ago and formerly taught for many years at the Museum of Fine Arts School, died in his Cambridge home July 7. He was 101, and his health had failed in the past year.

“He was a man who reached easily back into the Victorian era,’’ said his son Conrad of Silver Spring, Md. “It was like being raised by a father from the truly old school. He taught us that art is a way of life. All our life we watched him create, day after day, month after month.’’

The paintings, said his son Lucas of West Roxbury, ranged stylistically from graphic to expressionist, from works that reflected Mr. Feininger’s fascination with geometry to a more impressionist approach. Near the end of his life, he also incorporated stencils.

“I think one of my father’s biggest talents as a painter was his sense of color,’’ said his son Charles of Acton. “He would have a very clearly delineated shape of color, but within that color shape he would have quite a bit of modulation. So from a distance, you would think these are very crisp, bold color planes, but when you looked close, there were all these modulations.’’

Raised in a creative household, Mr. Feininger was the son of Lyonel Feininger, who was among the first painters Walter Gropius picked to teach at Bauhaus when the art and architecture school was founded in Weimar, Germany. Mr. Feininger, only 16 when he became a student at Bauhaus in its Dessau location, also was the younger brother of the photographer Andreas Feininger.

Born in Berlin, Mr. Feininger was a US citizen because his father was, too. Lyonel was born in the United States and was sent to Germany, his parents’ homeland, to study music in the 1880s. That set the stage for an upbringing for Mr. Feininger and his two brothers that seemed to float through time. Mr. Feininger learned English, for example, from a father who had last lived in an English-speaking community in the Victorian Age.

“I have always thought there was something charming, careful, and old-fashioned about his English,’’ said Emmy Norris, a longtime friend who formerly was assistant curator at the Busch-Reisinger Museum at Harvard. “It was always very precise, and he was an excellent writer, but there were these little turns of phrase I enjoyed a lot.’’

Along with painting and teaching, Mr. Feininger wrote a memoir published only in German and penned English essays about his father’s work that offer perhaps the most encompassing criticism of Lyonel’s paintings, given the firsthand biographical observations he sprinkled through the text.

“Seeking to travel light, he saw the acquisition of property as a snare to be avoided,’’ he wrote in “Lyonel Feininger,’’ a 1974 book edited by June L. Ness. “I find some kind of significance in the fact that my father never owned a house of his own, nor learned to operate a car. . . . He needed privacy but detested solitude; he greatly enjoyed the presence of his family - but in another room.’’

That distance may have aided father and son when Mr. Feininger began painting in 1929.

“He never obtruded a view, did not interfere,’’ Mr. Feininger wrote of his father in a 1983 essay for The Christian Science Monitor. “I recall best his occasional plea to remember what painting was about: the artist’s responsibility to discover ‘his form,’ and not to get lost in anecdotal preoccupation with subject matter or ‘photographic shading’ of surface values.’’

Theodore Lux Feininger initially showed as an artist under only his first two names to avoid special treatment because of his father. At Bauhaus, he played in a jazz band with other students and began taking photographs, capturing the joy and exuberance of his teen years.

Mr. Feininger’s childhood coincided with World War I, and the Nazis rose to power in his early adulthood. He shot photos for the Berlin agency Dephot, lived three years in Paris, then became the first of his family to leave Germany when he moved to the United States in 1936.

“Possession of the English language and of a United States passport facilitated my entry but did not in any other way mitigate my greenness on the scene,’’ he wrote in a 1984 essay for The Christian Science Monitor.

Though he left most of his photo negatives in Germany, “chief among my ‘visible means of support’ were four crates filled with my paintings of the previous six years; a valuable although invisible property was my intimate acquaintance with the inconveniences of an unpredictable income, and the virtues of oatmeal and bread and cheese as a diet. I knew that my freedom to dispose of my time and energies was more important than a comfortable standard of living.’’

He taught at Sarah Lawrence College in Bronxville, N.Y., and his first wife, Jeanne, died of cancer a few years into their marriage. An offer to teach at Harvard brought him to Greater Boston.

“He took his teaching very seriously and enjoyed teaching, but his primary interest was his own art,’’ Lucas said. “If he had his druthers, he would just as soon be in a studio eight or 10 hours a day painting.’’

A service will be announced for Mr. Feininger, who, in addition to his three sons, leaves four grandchildren.

Though his formal education ended in seventh grade, Mr. Feininger “spoke German, English, French, some Swedish,’’ Conrad said. “He could read Italian, Latin, even some ancient Greek. He had an enormous intelligence.’’

There was a valedictory feel to the way Mr. Feininger concluded his 1984 essay for the Monitor, when he mused about the course his life took after he moved to the United States in his mid-20s.

“I followed my star after I got here, without trying to tell the inhabitants of the New World how they ought to be,’’ he wrote. “I took them as I found them, but I believe that, retired after 25 years of teaching, I have left them better than they were.’’