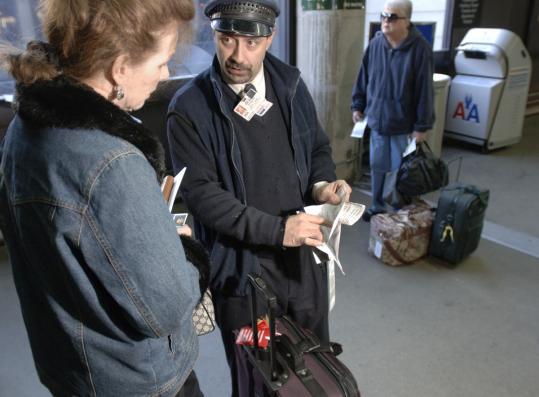 Curbside at Logan International Airport’s entrance for American Airlines, Don DiFiore often was the first company employee passengers met, and many were glad they did.

“He knew right where to go, what to say, who to see,’’ said longtime friend Dave Dwyer of Revere, who years ago worked with Mr. DiFiore as a skycap. “He’d take you down to the right gate. And if you weren’t going to make it, he would take your bag to the bag room himself. Anything to help a good customer.’’

Customers responded with tips until 2005, when American began charging a $2 curbside bag fee that skycaps had to collect and hand over to the airline. That made many customers think they were tipping when they weren’t, the skycaps contended, and their tip income dropped dramatically.

Mr. DiFiore, lead plaintiff in a federal lawsuit that forced the airline to compensate skycaps for lost tips, a judgment that was reversed on appeal last month, died of lymphoma on Sunday in Brigham and Women’s Hospital. He was 50 and lived in Wilmington.

“What was so great about Don was he always believed in the principal, and he always did this for all the skycaps,’’ said Shannon Liss-Riordan of the Boston firm Lichten & Liss-Riordan, which represented the skycaps. “This wasn’t just a personal battle for him, and in a way, it was a battle for all workers against corporate America. This was a battle against big business, which thought they could trample on the rights of the little guy, and Don wanted to do something about that.’’

Mr. DiFiore, who became a skycap for American in 1983, wasn’t the type to back down from battle. Even though he lost his sight in one eye in childhood while playing hockey, he tried to join the Marines during the Iran hostage crisis in 1979. He was turned down again for eyesight reasons in 1983 when he headed back to the recruiting office after the bombing of the US barracks in Beirut.

“Ever since I saw ‘The Deer Hunter’ I’ve had this patriotic feeling,’’ Mr. DiFiore, then 22, told the Globe in 1983, referring to the Academy Award-winning film.

He was just as adamant about taking on American Airlines after it imposed the $2 bag fee.

“In the first message he left me, he said: ‘Don DiFiore, American Airlines skycap,’ ’’ Liss-Riordan recalled. “He said it with pride. This is what he did. This was his life.’’

The skycaps prevailed, and the ruling was affirmed by the Massachusetts Supreme Judicial Court before the US Court of Appeals for the First Circuit in Boston reversed the decision in May.

“This is really the right thing to do,’’ Mr. DiFiore told the Globe in 2008, when the skycaps prevailed in the initial federal jury trial, which would have given him $41,886 in fees for 20,943 bags he had handled since American imposed the $2 bag fee. “The skycaps work for tips, and these guys came directly at our tips.’’

Liss-Riordan said her firm plans to petition for a US Supreme Court review of the First Circuit’s reversal.

“Don was a fighter, he was an organizer, I would say,’’ she said. “He brought people together over this issue. He fought for his co-workers, and he believed in it.’’

“He always kind of kept to himself and was a quiet person,’’ said his son Domenic of Derry, N.H., “but he wasn’t afraid to be the center of attention.’’

Born and raised in Chelsea, Don George DiFiore was the younger of two children whose father ran a glass company.

Until he was struck by a stick, leaving him legally blind in his right eye, his hockey playing reputation preceded him.

“He was a legend in hockey when we were kids,’’ Dwyer said. “Before I even met him, you’d go to a practice or a game and they were always talking about this guy who scored one or two goals in the last game. That was him.’’

“He was very intelligent,’’ said his daughter, Ashley of Derry, N.H. “Any advice I ever needed or any questions I had, he always had the right answer.’’

Dwyer said Mr. DiFiore’s cousins in New Hampshire “all refer to him as the big brain.’’

“Because he was so smart,’’ Ashley said. “He always knew something about everything. It could be the most random thing.’’

One subject Mr. DiFiore knew a lot about was music.

“He did everything in life to the nth degree as a friend, too,’’ he said. “Don was a great son, a great dad, and a great friend, and I appreciate the time I had with him. I see a lot of people go through life without any real friends. I was lucky to have him for 35 years.’’

In addition to his son and daughter, Mr. DiFiore leaves his longtime companion, Janice Belanger of Dracut; and two other sons, Jared and Joseph, both of Derry, N.H.

A memorial service will be held at 10 a.m. today in the Frank A. Welsh & Sons Funeral Home in Chelsea. Burial will be in Holy Cross Cemetery in Malden.

Liss-Riordan said her last phone call to Mr. DiFiore was to tell him the First Circuit Court of Appeals had reversed the tips case decision.