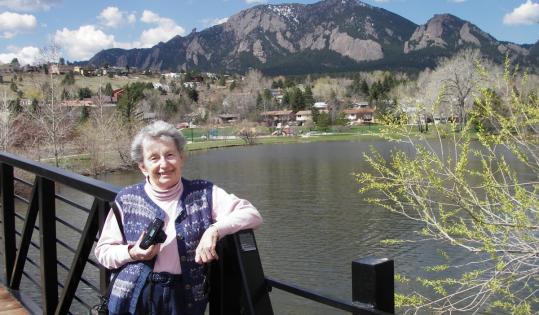 Judith Chalfen, shown in Colorado in 2010, was one of four Newton mothers who helped found Action for Children’s Television. She also helped organize the New Art Center in Newtonville.
By Gloria Negri Globe Staff / June 9, 2011

It was the 1960s, and “Sesame Street’’ and Jim Henson’s Muppets had not yet appeared on public television. The few children’s shows on regular television often exposed them to violence and contained many commercials that made the young watchers crave inappropriate products.

They were Judith (Resnick) Chalfen, Evelyn Kaye, and Lillian Ambrosino, and they would make ACT a national cause.

Charren, now of Dedham, recalled the zeal and determination of the foursome. “This is not to brag, but these were a bunch of bright women. Judith was a good businesswoman and was with us every step of the way.’’

That included testifying before the Federal Trade Commission about the negative impacts of television content. Mrs. Chalfen also was interviewed on television on the issue by Barbara Walters, her family said.

Mrs. Chalfen, who joined her three colleagues on trips to Washington, D.C., to promote their cause with congressmen and relevant agencies and, in the mid-1970s, played a major role organizing what became the New Art Center in Newtonville, died May 22 of non-Hodgkin’s lymphoma at Briarwood Healthcare and Rehabilitation Centre in Needham. She was 85 and lived in Newton for 60 years.

“Judy had a lot of political experience and was part of every discussion,’’ said Kaye, now of Boulder, Colo.

The zeal and cause of the four women caught the nation’s attention, and in 1972, the Globe reported that four years after it was formed, ACT had been joined by “25,000 people across the land and their power is so awesome that the mere mention of Action for Children’s Television caused top TV executives to run for the antacids.’’

ACT opposed violence in children’s shows and advertisements that made them want inappropriate items.

Mrs. Chalfen loved the arts and wanted to make them available to others.

In the mid-1970s, said her son, Andrew of Philadelphia, Mrs. Chalfen was a key figure in organizing the New Art Center, “arranging the purchase of a vacant church from the city of Newton for $1. She organized its board, secured funding and benefactors, and started arts programming.’’ The center opened in 1977.

“Judy was amazing,’’ said Beverly Bernson of Newton, who met Mrs. Chalfen in the 1970s while both were volunteering on Newton’s Cultural Affairs Commission. “She was a very bright and interesting woman. We felt Newton should have an arts center.’’

Once the project started, she said, “Judy was on hand 24/7. She was the day-to-day person in control.’’

In 2006, the arts center presented Mrs. Chalfen with its Governors Award for “meritorious service . . . Judy served an integral role in founding the NAC, including raising money, assisting with renovation, and creating a coalition of musicians, artists, actors, and dancers. She was its first director and a member of its board of governors for 27 years.’’

Mrs. Chalfen was born in Boston to socialist community organizer Abe Resnick and his wife, Rose. Her son said she grew up in a Jewish immigrant neighborhood in Boston’s tightknit West End. She spent summers in a sailing camp set up by her parents in Gloucester.

She attended Girls Latin School and was in the Smith College class of 1947, majoring in economics.

In 1946, she and a Smith classmate traveled to Europe and worked on the postwar reconstruction effort, her son said. On returning to the United States that year, she moved to New York, where she worked for several publishing and radio companies.

She was, in a way, a Renaissance woman. “She was ahead of her time,’’ her son said.

“Back in the mid-1960s,’’ he said, “Judy started taking modern dance and yoga classes. In the 1970s, she took up transcendental meditation and continued her meditation and yoga practice steadily for the rest of her life.’’

Andrew said that in the mid-1970s, his parents “felt they had enough of the physical rigors of sailing and skiing. So as part of their lifelong curiosity about everything and everyone, they started to travel.’’ And it was extensive.

Also about that time, her family said in a eulogy, Mrs. Chalfen “helped with the family finances by getting her real estate license and working as an agent in the Newton area. Both she and Mel, pioneers in so much, had also become early adopters and experts in the older housing stock of Newton, which, hard as it is to believe now, was not in great demand in the ’50s and ’60s.’’

“Right to the end,’’ Andrew said, “Mom kept intellectually active, reading with her book group, following local and world events, giving to her favorite causes like the Cape Ann Historical Society and Essex Greenbelt, and, most of all, keeping close tabs on our whereabouts.’’

In addition to her son, Mrs. Chalfen leaves two other sons, Robert of Cambridge and Daniel of Boulder, Colo.; a brother, Jeff Resnick of Brookline, and a grandson.

Services have been held.

Gloria Negri can be reached at negri@globe.com.