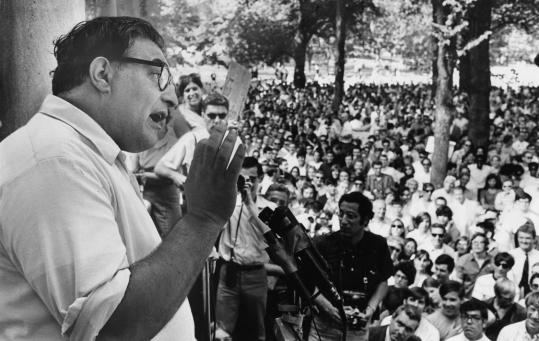 MIT professor emeritus Jerome Lettvin was best known for his work on the 1959 paper “What the Frog’s Eye Tells the Frog’s Brain.’’ His measurements of “bug detectors’’ in frogs’ eyes shook up neuroscience.

But it was his 1967 surprise showdown with counterculture guru Timothy Leary in a debate over the use of LSD that further cemented Dr. Lettvin’s fame at the Massachusetts Institute of Technology.

Drafted at the last minute by student organizers, Dr. Lettvin left his frogs and, with no preparation time, faced a lotus-positioned Leary sitting on stage amid exotic trance-like effects.

When Leary likened an LSD user’s involuntary recurring trips to the experiences of an ancient mystic, Dr. Lettvin, a former Army psychiatrist during World War II, replied in his booming voice with one of the first expletives ever used on television. The audience’s wild cheers can be heard in an audio recording on YouTube.

“The kick is cheap. The ecstasy is cheap. And you are settling for a second-rate — permanent, second-rate — world by the complete abrogation of the intellect,’’ Dr. Lettvin said in the debate. “You’re selling off exactly those functions which have set you aside critically in every possible way. . . . At this point sir, I look upon you as a tool of the devil.’’

Dr. Lettvin, who was a professor of electrical, bioengineering, and communications physiology at MIT from 1951 to 1985, died April 23 at his home in Hingham from complications of Alzheimer’s disease, according to his wife, Maggie. He was 91.

“He liked it when people would come back and be just as dominant,’’ said author Mark Abrahams, who edits the Annals of Improbable Research and originated the popular Ig Nobel Prize ceremonies at Harvard.

Dr. Lettvin was once featured at the Ig Nobels in a contest to determine the World’s Smartest Man. “We had Jerry singlehandedly debating against a group from MENSA. They were all talking at the same time. That was about a draw,’’ said Abrahams, who is writing a book about Dr. Lettvin.

Born Jerome Ysroael Lettvin in Chicago to Ukrainian immigrants, Dr. Lettvin was the oldest son of a lawyer and a piano teacher. He grew up in an “enchanted ghetto, Humboldt Park,’’ he wrote in an autobiography.

His mother wanted him to become a concert pianist, he wrote, but he quit at age 8 and left that career to his younger brother Theodore, a prodigy who played with the New York Philharmonic and other major symphony orchestras. He died in 2003.

Dr. Lettvin wanted to be a poet, but his mother encouraged him to enter medicine. He graduated from Tuley High School in Chicago and spent a year at the University of Chicago before transferring to the University of Illinois. There he earned his undergraduate degree, then trained as a neurologist and psychiatrist and graduated in 1943.

He interned in the nerve unit at Boston City Hospital before he was “dragooned into shrinkship by the Army’’ in 1944 and made chief of psychiatry for the 237th General Hospital in France, he wrote.

Back in Chicago after the war, Dr. Lettvin was dating a woman who decided he would be a better match for her sister, Maggie. He went on three dates with Maggie in 1947 before they got married. They were together 64 years.

“He really was utterly brilliant,’’ Maggie said in an interview. “There was nothing about him that wasn’t entrancing.’’

He held posts at the University of Rochester and Manteno State Hospital in Illinois before coming to MIT to do research in the 1950s.

He and Maggie were an odd match at first glance. Jerry at one point weighed more than 300 pounds. He was eternally rumpled and never without a cigarette until his last days. Maggie became a fitness queen in the 1970s with her own show on WGBH called “Maggie and the Beautiful Machine.’’

“We decided we would not bother each other with our ideas,’’ said Maggie, now in her 80s. They had three children.

“He was an excellent theorist and obviously thought deeply about things,’’ said his oldest son, David, who lives in Hamilton. “But the ideas he had were enough out of the mainstream of current thought that he had to be constantly evangelizing for them.’’

At MIT, his office in Building 20 was crammed with books, most overdue from the college library. Dr. Lettvin claimed he did not return them because the library would send him the students who wanted those books, and he would interview them as potential assistants.

“I was Jerry’s last graduate student at MIT, and he was a tremendously important teacher in my life,’’ said Gill Pratt, now a professor of electrical and computer engineering at Olin.

“Jerry opened my eyes to what was possible — that people who are simultaneously extraordinarily intelligent and incredibly kind do exist, and that having the mathematician Benoit Manedelbrot visit your lab in the morning and helping an undergraduate deal with a romantic break-up can be part of the same job,’’ Pratt said. “Jerry was a brilliant mensch.’’

Among Dr. Lettvin’s many projects was a new theory for the causes of dyslexia, research he conducted beginning with Gadi Geiger, a visiting scientist at MIT from Israel. They first published their work in the New England Journal of Medicine in 1987.

“He was in my view one of the greatest intellects we had around here,’’ Geiger said. “From poetry to science, obviously to neurology and to electrical engineering, he was everywhere.’’

Geiger recalled an argument he had with Dr. Lettvin that spanned more than three weeks in the lab. The men began the debate again each morning as soon as the coffee was on.

“It was absolutely wonderful,’’ Geiger said.

Their finding that dyslexia stems from issues involving vision, instead of understanding of language, remains controversial among researchers.

In a 2007 interview with an online magazine called The Learning Project, Dr. Lettvin described his approach to science as the “garbage picker-upper’’ mode.

“I look at the parts that others choose not to pay attention to,’’ he said. “It’s interesting the number of things that are not paid attention to . . . absolutely astounding.’’

“I was fortunate enough to have had a father who was an anarchist, who pointed out to me that the interesting things always lay out of the beaten path. You look for them, and when you find them, you play with them,’’ Dr. Lettvin said.

His niece Judy Graham, who lives in Chicago, said in an e-mail that Dr. Lettvin was always an artist at heart.

“There was no one like Jerry. The scope of his knowledge was immense. He had enormous wit, unparalleled spirit, and enthusiasm for life. He dressed like a slob, cared nothing for the ordinary things of life. His passion was the life of the mind.’’

His granddaughter Meghan McCambridge of Quincy recalled many days as a young girl visiting his lab. Sounds of crickets her grandfather used to feed his frogs filled the air.

“So tell me what adventures you’ve been on?’’ Dr. Lettvin always asked her before they raided the MIT vending machines for snacks.

“I think it really molded me,’’ she said. “To always think just going from point A to point B wasn’t good enough. What could I do along the way to make it more exciting?’’

In addition to his wife, son David, and granddaughter Meghan, Dr. Lettvin leaves his daughter, Ruth McCambridge of Hull; another son, Jonathan, of Watertown; five other grandchildren; and six great-grandchildren.

A memorial celebration is planned for June at MIT.

Globe Correspondent J.M. Lawrence can be reached at jmlawrence@mac.com