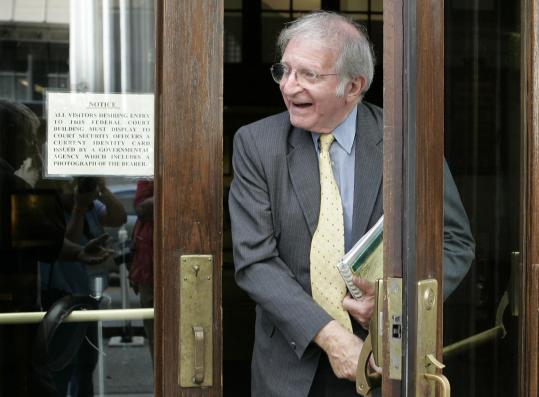 Leonard Weinglass left an appeals court in Atlanta after a hearing for the Cuban Five in 2007. (John Bazemore/Associated Press)
By Frank Eltman Associated Press / March 26, 2011

NEW YORK — Leonard Weinglass was a modern-day Clarence Darrow, an attorney who defended people for their politics, not their alleged crimes, friends said.

His clients included Black Panthers, radicals, a cop-killer who sparked crusades against the death penalty, the Chicago Seven in the 1960s, and the so-called Cuban Five in recent years.

Mr. Weinglass died Wednesday in New York City. He was 77 and had pancreatic cancer.

“I always considered Lenny the modern-day Clarence Darrow,’’ said Michael Krinsky, a partner at Rabinowittz, Boudin, Standard, Krinsky and Lieberman, where Mr. Weinglass worked. “He was a lawyer who devoted himself to defending people, usually for political reasons. I think one of the reasons he was so effective with juries is they saw his decency and sincerity.’’

In 1968, Mr. Weinglass was part of the defense team representing the Chicago Seven, accused of various crimes stemming from violence at the Democratic National Convention.

“I thought then that Len was the best trial attorney I ever met,’’ said Tom Hayden, one of the defendants. “We roomed together during the trial, and he taught me to be his sort-of assistant counsel. I think everybody in the courtroom came to realize what an extraordinary lawyer he was.’’

Some of the defendants were convicted of crossing state lines with the intent to incite a riot, but an appeals court later reversed the convictions. The Justice Department never retried the case.

Later, Mr. Weinglass helped defend Daniel Ellsberg and Anthony Russo, who were charged with leaking the Pentagon Papers. Criminal charges against the two, who copied and disseminated the classified documents about the US role in the Vietnam War, were eventually dismissed.

Ellsberg said he owed his life to Mr. Weinglass.

“He wasn’t drawn to making money; he was drawn to defending justice,’’ Mr. Ellsberg said. “He felt in many cases he was representing one person standing against the state. He was on the side of the underdog. He was also very shrewd in his judgment of juries.’’

Mr. Weinglass was a 1958 graduate of Yale Law School and served as a US Air Force captain with the judge advocate’s office from 1959 to 1961. He opened a law office in Newark in the 1960s, Krinsky said, and soon was representing defendants in civil rights cases.

“It was lonely work, it was dangerous work, but he was making a very vital contribution to the civil rights struggles of the late ’60s,’’ Krinsky said. “It was the sort of dedicated, selfless work that characterized his career.’’

Other high-profile defendants included Angela Davis, a former Black Panthers member acquitted of murder and kidnapping charges in California in 1972.

Another client, Kathy Boudin, was a member of the Weather Underground who was charged with murder after a 1981 robbery of an armored truck in New York. She was convicted for her role in the holdup and was paroled in 2003.

He also worked on the ongoing death row appeals of Mumia Abu-Jamal, a former Black Panther convicted in the slaying of a Philadelphia police officer.

In recent years, he took part in the Cuban Five case, in which defendants were accused in Florida of spying for Cuba.